iPad Air 2 vs iPad Air: 5 reasons we'd get the original

Save yourself some money with the first-gen iPad Air 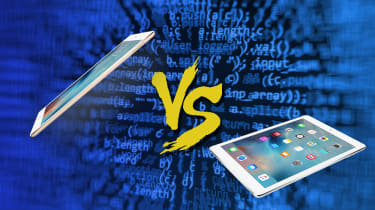 The iPad Air 2 is without a doubt one of the finest tablets currently on the market, but it is facing surprising competition from the device it was destined to replace, the original iPad Air.

Many customers, whether existing owners or new buyers, are understandably sceptical about the worth of upgrading to the second iteration iPad Air 2.

Here is a list of five reasons why we'd take the original over the newer iPad Air 2.

The biggest consideration for most customers will be the price.

Though the entry-level iPad Air 2 offers plenty for a pretty affordable price, the original iPad Air can be picked up brand new for 100 less. Many independent online sellers list the 16GB Wi-Fi only iPad Air for around 250, and you may even see the occasional 32GB model for the same price.

There isn't that great of a leap up from the original iPad Air to the Air 2, at least not a 100 leap. So if you're looking to save cash, stick with the first-gen model.

The iPad Air 2's display is, to all intents and purposes, identical to its predecessor. They both use a 9.7in LED display, with a 2048 x 1536 resolution and a pixel density of 264ppi.

The newer model has a very slightly higher maximum brightness, and claims to have a more responsive touch-screen, but other than that, they're mirror images of one another.

In fact, Apple's so ahead of the curve with its displays that even older generations are often more than capable of keeping up with the current competition. With that in mind, there's little reason to upgrade from a display point of view.

Although Apple reduced the battery capacity of the second iPad Air by over 1,000mAh compared to the original, the difference in real-world battery life is negligible at best.

In our tests, the original Air lasted just five minutes longer, despite the larger battery. The same is also true of the new iPad Air's performance, more or less.

The iPad Air 2 is one of the fastest 8in tablets on the market, but its predecessor was no slouch either. The fact is, unless you're using it for seriously intensive media editing tasks, the original Air is still plenty fast enough to handle day-to-day multitasking.

As with all Apple products, the iPad Air range operates on a tiered storage model. The iPad Air and the Air 2 offer a fixed amount of disk space, starting at 16GB and moving up.

However, a 16GB allowance can fill up quickly, especially if you're using your iPad to store photos, movies and music, as well as apps. Sadly, while the original Air had a 32GB storage tier, Apple has axed this amount from the Air 2, moving straight to 64GB.

64GB is a tad excessive, especially for a device that is unlikely to be used as a heavy-duty work device. A 32GB allocation is enough to ensure that you're unlikely to run out, but not so much that you'll be paying Apple through the nose for space you don't need.

The iPad Air 3 is, by all accounts, just around the corner. If the rumours surrounding it are accurate, the third-generation Air will be a substantially bigger upgrade from the Air 2 than the Air 2 was from the original.

If you're looking to upgrade, therefore, you're frankly much better off simply waiting until the iPad Air 3 hits store shelves.

Even if you don't want to jump straight to the newest Air itself, the Air 2 will doubtless receive the customary price cut, meaning you can save yourself some money by waiting.

...And why we would upgrade

Even with all the reasons listed above, upgrading to the iPad Air 2 is still an attractive prospect. For starters, it's slimmer and lighter than its predecessor, managing to shave off 1.4mm and 52g respectively. That may not sound like much, but in the case of a device as svelte as the iPad Air, it counts.

There's also the addition of TouchID, which is a nice (if non-essential) bonus, particularly since the introduction of Apple Pay. The cameras have been improved too, which is great for video calling - although tablets should never be used for actual photography.

And finally, the iPad Air 2 gets to take advantage of all the new bells and whistles included with iOS 9. Most notable is the Split View multitasking feature, which the original Air is not compatible with.