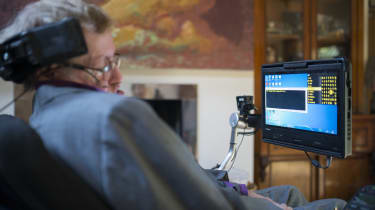 Intel has showcased software designed to help severely disabled people interact better with graphical user interfaces and make it easier for them to communicate.

The Assistive Context Aware Toolkit (ACAT) has been developed in collaboration with Professor Stephen Hawking, who Intel has been working with for 25 years.

The software has taken three years to develop as engineers have spent long periods observing the way the professor interacts with his existing system before performing the necessary upgrades.

Professor Hawking took the stage at an event in London to talk about the benefits of the technology.

"My old system is more than 20 years old and I was finding it very difficult to continue to communicate effectively and  do the things I love to do everyday," he said at the Keep Hawking Talking event.

This new system is life changing for me.

"Intel's research and development is bringing about changes in the world and in the way disabled people can communicate. By making this technology freely available, it has the potential to greatly improve the lives of disabled people all over the world."

Instead of revamping the time-based interface Stephen Hawking has grown accustomed to over 20 years, Intel has fine-tuned it by adding bespoke shortcuts to the interface.

Previously, simple tasks such as opening a file could take Professor Hawking up to 3 minutes as he had to control the on-screen mouse in various stages by contracting his cheek.

By building in a shortcut to a File Manager on his interface and allowing him to search his computer, ACAT permits Professor Hawking to open a file in 10 seconds.

Predictive text specialist SwiftKey has also contributed to the project and improved the system's efficiency by learn Hawking's vocabulary. The enhanced word prediction now means character input is cut by 20 per cent.

For someone as severely impaired as Professor Hawking, where every character results in expenditure of energy - this increased efficiency is vital as it reduces the fatigue of his cheek muscle.

"With the improvements made I am now able to write much faster and it means I can continue to give lectures, write papers and books, and of course speak with my family and friends more easily," Hawking said.

His typing speed has doubled and common tasks such as navigating the web are 10 times faster.

How will this benefit others with disabilities?

Intel plans to open source the technology in January 2015.

"Our hope is that by putting this out in the open source community we're enabling researchers and developers to build on the three years of work we put into this," said Lama Nachman, principle engineer, project lead at Intel.

"Basically what we're planning to do is reach out to multiple university in the areas of... word prediction, natural language processing, user interfaces and sensor technology to initially get them going."

Vendors are expected to start using the software to rollout bespoke products from 2015 to help people with severe impairments caused by Quadriplegia and Motor Neurone Disease, which affects more than three million people worldwide.

Intel's system will be customisable to allow interaction via touch, eye blinks, eyebrow movements or other inputs such as the cheek movement used by Professor Hawking.

KNOB attack lets hackers listen in on your Bluetooth calls