Google Glass: Why Google should call it quits for consumers

Caroline Donnelly explains why Google should cut its losses in the consumer market, and focus on making Glass enterprise-ready 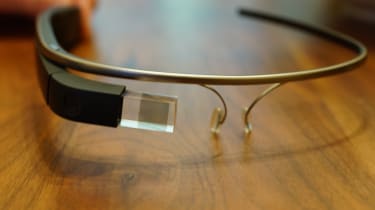 When Google Glass was unveiled to the world in April 2012, it made its debut alongside a cutesy video showing how the head-mounted computer had the potential to revolutionise our daily lives.

The 2:30 minute clip showed a Glass wearer using the hands-free device to firm up plans to meet with friends, find their way to a local bookstore, before remotely serenading a lady friend with a ukulele.

More than two years have passed since that concept was shown and Google has yet to confirm a general release date. With reports about developers losing interest in making apps for the platform, it looks like Google's "vision" of the future is no closer to becoming a reality.

The limited battery life is frustrating because heavy use will drain them within a few hours. Who want such a short battery life?

Could that be because the search giant has realised that while its early Google Glass promos positioned the device as a consumer product it's actually a better fit for the enterprise market?

Early reviews of the prototype devices flagged its lacklustre battery life as a possible impediment for anyone hoping to use Google Glass all day, while the list of public places where users are banned from wearing them on privacy grounds continues to grow.

"When they were first launched, I personally thought I'd be wearing them 24/7," Kevin Curran, a senior member of the Institute of Electrical and Electronics Engineers, tells IT Pro.

"The limited battery life is frustrating [as] heavy use will drain them within a few hours. Who wants such a short battery life? And when they do run out, where do you put them?"

The privacy backlash to Google Glass has come as a surprise to some, and when coupled with its inability to achieve all-day battery life could seriously damage its long-term consumer appeal, says Annette Zimmerman, Gartner's EMEA lead on devices.

"When you wear a pair of smart glasses, you have this camera [attached to your face] and you are involved with other people who are not wearing one, and in terms of privacy invasion this [scenario] is something completely new that has not existed before," she tells IT Pro.

"This will the biggest inhibitor, in my view, to the consumer uptake of Google Glass."

Curran also cites the lack of apps for the platform as another barrier adoption.

"Google's strict no advertisement permitted' policy is preventing rich development here [because] for any operating ecosystem to grow strong, it needs a rich tapestry of apps," he explains.

"It's also not as simple as porting traditional apps in may cases to the Glass platform as [it] requires very specific navigation through voice, taps and head tilts.

The devices have already had some success in the business market, adds Zimmerman, with Glass's hands-free navigation system winning it fans in a wide range of verticals, including the aerospace, healthcare and logistics markets.

"From a concept point of view, it reduces the time between discovering something and reacting to it. Users don't have to pull out a phone, type anything in [to be updated] and can react to it directly," Zimmerman explains.

"I've spoken to a whole set of companies that have just started their pilot [deployments]," she adds, including delivery firms DHL and UPS.

"It [is] also being used in hospitals by surgeons who use the 3D object [imaging] and the augmented reality [features it offers] in their surgery."

Similar head-mounted devices have also been introduced in the US for law enforcers, to help them record any run-ins they have with suspects, as well as detailed crime scene information.

Business interest in the platform is something Google has been actively trying to cultivate with Google Glass, a company spokesperson told IT Pro, through it's Explorer programme.

"The goal of the Explorer program was to get Glass in the hands of all types of people from parents to chefs, firefighters to surgeons, and see how they use the device in the world," they said.

"It's still early days but the potential for Glass in various industries is massive. We're inspired by the different use cases we've seen and excited about those to come."

The technology was worn by staff as they greeted Upper Class customers, allowing them to pass on up-to-date flight information and passenger details without having to break away from passengers to consult a computer.

Speaking to IT Pro, Tim Graham, technology innovation and development manager at Virgin Atlantic, said passengers had responded well to the technology, and remarked on how the service they received was "more personalised and efficient" as a result of its use.

"Our agents trialling Glass [also] reported that they were comfortable to wear during their shift (typically eight hours at a time)," Graham says.

The technology isn't perfect, though, with Graham citing several areas where improvements will be needed before Virgin can embark on a company-wide deployment of Glass.

"The technology is still in its infancy, and while it worked well for this particular meet and greet' function in a small area, both battery life and connectivity (via Wi-Fi and Bluetooth) does need to be improved before it could be rolled out on a wider scale for other roles within the airline," he explains.

Despite these technological drawbacks, the company is pushing ahead with its Glass deployment plans within its Upper Class Wing.

"We have committed to rolling out both Glass and smartwatch technology at the Upper Class Wing early next year because it was such a great success with our customers and staff," he adds.

The popularity of Glass in the business market has clearly not gone unnoticed by the boffins in Mountain View. Reports earlier this month suggested Google was working on a beefier, Intel-powered version, aimed at enterprise users.

Google Glass 2, as the device has been imaginatively dubbed, is being marketed at hospitals and manufacturing companies, a source told the Wall Street Journal.

Zimmerman says, if true, Google would be right to directly court the enterprise with the second iteration of the device, particularly as so many other vendors are preparing to launch similar products with one eye on the business market.

As an example, she flags the work Samsung has been doing with virtual reality headset makers Oculus Rift, but the likes of Fujitsu, Epsom and Canon also have business-focused offerings in the works.

Furthermore, there are also competitors with products emerging at prices much lower than the 1,000 quoted for the Google Glass prototype.

These may lack the head-mounted camera of Google Glass, but boast the same type of hands-free navigation system that have made the latter so popular with enterprise users so far.

"Some of these products are really not smart glasses [in the traditional sense], and cost around 20 to 30 bucks and all it does is have LED lights that only you can see that tells you if you have a new message, or if someone is calling you... they work with a Bluetooth connection through the phone," she adds.

Despite encouraging signs on the business adoption front, it's clear Google still has its work cut out when it comes to making Glass a truly enterprise-ready product, particularly when it comes to apps, battery life, connectivity and pricing.

Considering the firm doesn't actually have a finished version of the product on general release yet (and no confirmed signs on when one will appear), it has already secured a level of brand awareness within the business world its competitors can only dream about. However, it needs to move quickly to capitalise on this advantage and address the complaints levied at the device.

Otherwise, its rivals may be able to piggy-back on the work Google has done to popularise the notion of smart glasses in the enterprises and win deals with cheaper and higher-performing devices.