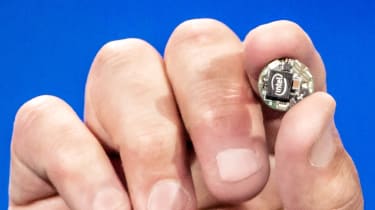 Intel's attempt to gain a slice of the lucrative wearables market continues with the chipmaker unveiling a button-sized power module at CES 2015.

The Curie' SoC is the size of a shirt button and has a 32-bit Quark microcontroller, Bluetooth Low Energy, battery, accelerometer and gyroscope built into it.

The small form-factor means the chip can be built into bags, bracelets, buttons, pendants, rings and fitness trackers.

With 384kB flash memory and 80kB SRAM on-board, the Curie is expected to be used for basic tasks like displaying social notifications.

Battery life is an area where all wearables are struggling at present - with many users having to charge smartwatches at least every 48 hours.

Intel claims the Curie module can run for "extended periods" but has declined to go into specifics at this time.

These kits have embedded software running the module together with companion smartphone apps and cloud capabilities.

Intel will release Curie in the second half of 2015, and while it has yet to disclose pricing, it's expected to be competitive to attract developers.

In a bid to gain traction in the market place, Intel also announced a partnership with Oakley. The sunglass maker is expected to release an intelligent product later this year designed to improve athletic performance.

This is the latest in a long line of partnerships, with Intel already having struck deals with Fossil, SMS Audio and also splashing out $150 million to purchase smartwatch maker Basis.