iPhone 6 Plus vs Nexus 6: Battle of the phablets

Is the near-6in Android phablet better than the biggest iPhone? 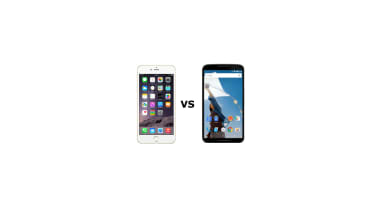 Apple has released its first ever phablet in the form of the iPhone 6 Plus whilst Google has unleash its biggest Nexus handset to-date.

Both devices are powered by premium components, offering high-end performance. Below we take a look at how they compare:

Google's flagship handset has a gigantic 5.96in AMOLED display boasting a 2560 x 1440 resolution (493 ppi). Despite the excellent pixel density there are issues with the brightness.

The Android 5.0 Lollipop software uses an "adaptive brightness" setting, which means it's constantly changing the screen depending on the app you're using. In general, you'll find the brightness hovers between the 260 280 cd/m2 mark, so it's not able to compete with the iPhone.

The mammoth screen size is reflected in the dimensions of the device too. It's got a chunky 10mm thickness and weighs in at 184g. We do like the curve on the rear-panel and the soft touch matte-plastic is comfortable to hold. 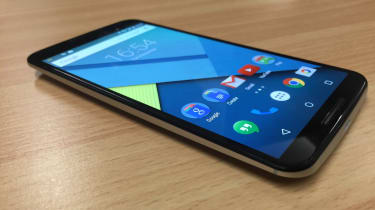 The iPhone has big bezels and an all round large form factor but it's not as bulky as the Nexus. The 6 Plus has a 7.1mm thickness and weighs 172g. Apple has crafted the device from a single piece of Aluminium and it looks beautiful. The curved edges mean you'll have no problems holding the device. 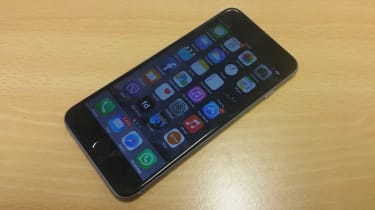 Winner: iPhone 6 Plus Neither device can be dubbed pocket friendly but the iPhone has the smaller dimensions and the display is superior.

The Nexus 6 has a 3,220mAh battery pack powering the handset. On paper it looks higher than most flagship devices, including the iPhone, but it also has to power a large, high resolution display. You can expect the handset to last through the day but don't expect much beyond this.

Hardware at a glance

The 6 Plus has the best battery life of any iOS handset we've tested to date. The 2,915mAh battery cell will last you throughout the day and you can charge it faster when using an iPad adaptor.

Apple continues to use a non-removable battery, so like the Nexus it's not designed to be easily replaced.

Winner: iPhone 6 Plus Despite not having any manually battery saving options and a brighter screen, the device will last longer than the Nexus 6.

The Nexus 6 is the first smartphone to ship with Android 5.0 Lollipop on board.

The latest version of Android offers all of Google's features as standard and because it's a Google branded device there is no carrier bloatware or obtrusive skin to worry about.

The benefits of Android include the ability to fully customise the interface, use widgets and transfer files between the smartphone and PC/Mac by simply dragging and dropping them. Being a Nexus device, it will also be first in line to get the 2015 Android update when it is released in September.

On the downside, the Google Store is a haven for malware as it lacks the quality control of the Apple App Store.

Apple ships the iPhone 6 Plus with iOS 8. App selection is fantastic and the interface is easy to pick up and use.

iOS now interacts with OS X - so when your MacBook is connected to the same Wi-Fi network as your iPhone it's possible to answer phone calls on your laptop, for example. 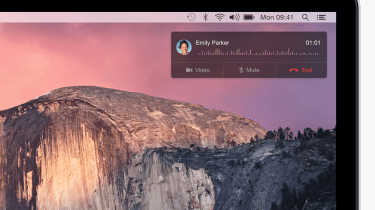 The proprietary nature of iOS isn't all bad as you can access all of Apple's services like the App Store, iBooks, iCloud and iTunes and you can also download popular Google apps like Chrome, Drive, Gmail, Inbox, Maps, and Translate. Theoretically, this means the iPhone provides the best of both worlds.

Probably the biggest annoyance of iOS is the inability to customise the interface and the lack of widgets. Moving content to and from the iPhone can also be a pain using iTunes - but there are useful alternatives like iSkySoft TunesOver.

Winner: Draw Both platforms have clear advantages meaning it's all down to personal preference.

The Nexus 6 makes use of Qualcomm's Quick Charge 2.0 technology. This is useful, when your battery is in the red-zone as it allows you to hook up the device to a charger for 15 minutes and then use it for up to six hours.

We like the dual front-facing speakers Motorola has built into the front of the device. This provides more immersive audio when playing music or watching movies.

Motorola also markets the device as water resistant. Although it's not certified to an IP rating like the Galaxy S5 or Xperia Z series, this should make it more durable than the iPhone.

The TouchID fingerprint sensor built into the home button is the standout feature of the 6 Plus. It allows you to unlock the device and authorise iTunes payments.

NFC technology is also available. The technology itself is not unique but the implementation is. On iPhones NFC can only be used in conjunction with Apple Pay. Users in the US can user their iPhone to pay for purchases in stores and this is expected to make its way to the UK in 2015.

Winner: Nexus 6 Although the Android device lacks a fingerprint scanner, the inclusion of Turbo charging, the dual-facing speakers and the water resistant win the day.

The Nexus 6 is available with 32GB or 64GB of on-board storage. MicroSD support is missing which is a shame but the internal capacity should be fine for the majority of users.

In terms of cloud storage, Google offers 15GB of free space, which is shared between the Drive, Gmail and Google+ photos services.

Apple dropped the 32GB edition so you have to choose between 16GB, 64GB or 128GB models. There is no microSD support available either and in 2015, 16GB of internal storage does not cut it anymore - unless you want to be constantly moving stuff on and off your device.

Apple offers 5GB of free iCloud storage, which is primarily used to backup content on the device.

Winner: Draw Neither handset jumps out with microSD support sorely missed on both.

On contract, the Nexus 6 is available free from 33 per a month.

Buying the device on contract is also expensive with the 16GB version available for free from 48.50 a month.

Winner: Nexus 6 - The Android device is cheaper, with more storage offered for less.

When comparing entry-level handset, the 32GB Nexus is 120 cheaper than the 16GB 6 Plus. However, this doesn't necessarily make it the better device.

We found the 5.96in screen on the Nexus and the dimensions too bulky. The Google-branded device may have a beefier processor and more RAM, but the display and battery life can't match up to the 6 Plus. If you can budget for a 64GB iPhone 6 Plus or above, we'd recommend the iOS device.