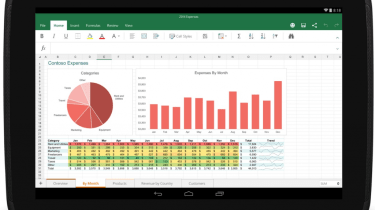 Microsoft is releasing the finished versions of its Office for Android apps today, meaning users can now access Excel, Word and Powerpoint from Android tablets.

In a blog post, announcing the general release date for Office for Android, Microsoft said the apps have been optimised for use with the operating system.

"Large touch points make it easy for even the fattest of fingers to navigate commands. External keyboards can be connected but certainly aren't needed.

"Existing documents open and render beautifully and are accessible instantly from device to device via a roaming 'most recently used' file list," it added.

The apps are free to buy for personal use, and will allow people to edit documents from their devices.

Anyone requiring what Microsoft deems "premium features" will require an Office 365 subscription, as will those needing it for commercial use.

To use Office for Android, users will need a 7in device or larger, while those with tablets with screens in excess of 10.1in in will require an Office 365 subscription to create and edit documents using the application suite.

Compatible devices will also need an ARM-based processor, 1 GB of RAM or more and to be running KitKat 4.4.

At the moment Lollipop, the most recent version of the Android operating system, isn't supported, but Microsoft has promised users this will be rectified in a future update.

Furthermore, users of Intel-based Android tablets will also be able to use the software suite "within a quarter", the Microsoft blog post confirmed.

Earlier this month, Microsoft offered up a series of preview Office apps to people running ARM-powered Android tablets running KitKat and Lollipop, but now it's preparing to rollout the finished articles later today.

Previously, the application suite was only available to those who signed up to a beta last November via Microsoft's Google+ page. That trial was so successful, Microsoft then went on to release preview versions of the apps.

"With 30,000 active users in various communities, we received a constant flow of feedback," the blog post continued.

"We appreciate our customers rating all three apps above 4.2 in the Google Play Store."

This story was originally published on 08/01/2015, but has since been updated to reflect the arrival of the general release date.