Moto 360 vs Samsung Gear S: Which smartwatch is best? 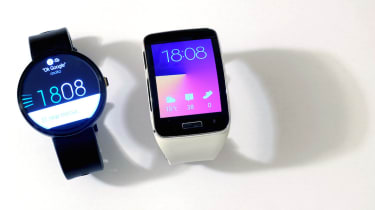 If you're thinking about buying a smartwatch, two of the most prominent options on the market are the Moto 360 and Samsung Gear S. Motorola has set an early benchmark from a design standpoint, whereas Samsung has attempted to pack as many features in as possible.

We take a look at how the devices compare in all the key areas:

The Moto 360 uses a circular clock-face design giving it the look of a traditional watch. Motorola has used brushed aluminium for body, and it's available with either a leather or metallic strap, so the 360 oozes quality. Crucially, it's also certified to be water resistant (IP67) so you don't have to worry about taking it off every time you wash your hands or take a shower.

Meanwhile, the Gear S has a curved rectangular screen, giving it a futuristic look. It's well-made too, with the screen surrounded by a metallic frame and Gorilla Glass used for the display. Like the Moto 360, the Gear S is also IP67 rated. 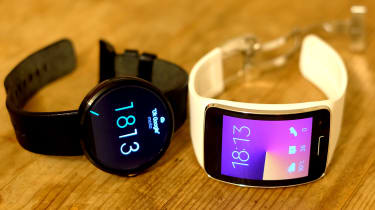 Winner: Moto 360 - The Motorola watch looks beautiful - combining the classic look of a watch with the high-tech functionality and a robust chassis.

We found the Moto 360 to be the more comfortable to wear. The soft leather didn't cause any irritation or leave marks, and the simple buckle made it easy to put on and take off.

The leather version of the Moto 360 is the lightest model available at 49g. Metallic bands increase the weight. You have a choice between an 18mm strap (104g) and the thicker 23mm band (124g).

The Samsung Gear S has a fixed proprietary rubber strap (third-party alternatives are available). The curvature on rear of the Gear S aimed to provide a better fit, but we didn't find it as snug a fit as the 360. We didn't like the large and fiddly clasp either. Weighing in at 67g, it's was a not much bulkier than the leather edition of the 360. 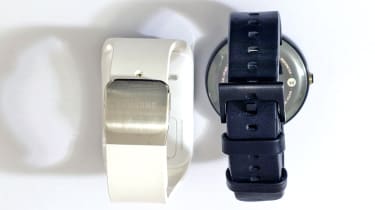 Winner: Moto 360 - We found the leather version of the 360 more comfortable to wear.

The Moto 360 screen looked great from a distance, but up-close it wasn't the sharpest. The 1.8in LCD screen packed a 320 x 290 resolution, offering density of 205ppi. This sort of density is fine for a tablet but it looked blocky on the tiny display.

The Samung Gear S had a larger 2in display of 360 x 480 pixels, bringing a higher pixel density of 300ppi. It was sharper and image quality better because the Super AMOLED screen offered superior contrast and punchier colours.

We found the rectangular shape more practical when reading text-based notifications too.

Winner: Gear S - The display provides is sharper and the rectangular shape is more convenient for reading notifications.

The Moto 360 uses Google's Android Wear system whereas the Gear S runs the open-source Tizen OS, which Samsung played a roll in creating.

Both use gestures as the primary form of interaction, with physical buttons restricted to waking the device.

Android Wear relies on notification cards', similar to those seen in the Google Now application. They offer notifications, the weather, and anything else Android Wear thinks you might need.

Wear users are encouraged to speak to the device. It wants to you issue voice commands like send a text', take a note' or show me my heart rate'. 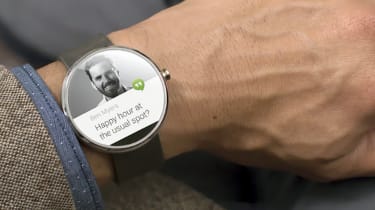 The apps roster for the Moto 360 is in its infancy, and there are approximately 180 apps available. We expect this to increase as the popularity of smartwatches takes off. 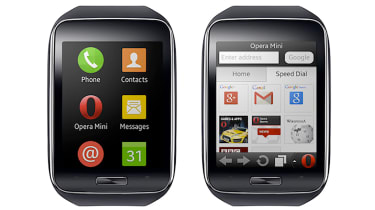 Tizen is similar to Android. Swiping up from the bottom of the screen brings up a traditional icon menu of apps, where this sort of menu is buried fairly deep in Android Wear.

There is a full web browser further extending the Gear S's capabilities into smartwatch territory. Using it feels much fiddlier than it would on a phone.

This edition of Tizen has been out longer than Android Wear so it has more apps, at the time of writing. They are downloaded through Samsung's own apps portal rather than Google Play, just like the main Gear Manager app.

Winner: Draw -  Tizen may have more apps at the minute but the development of Android Wear is expected to be more dramatic over the next 12 months.

The Samsung Gear S has limited compatibility, which is a big negative for those who don't own any other Samsung products.

In order to receive notifications and install apps, the Gear will need to be synced up to with one of the following Samsung Galaxy phones running Android 4.3 or above:

You will need to download the Gear Manager app, available from the Samsung Apps store rather than Google Play.

The Motorola Moto 360 offers greater flexible as all you require is an Android 4.3+ phone, along with the Android Wear companion app. This app is available from Google Play so it's not locked to Motorola handsets.

Reports suggest Google is looking at extending Android Wear compatibility to iOS and Windows phones too, but nothing has been confirmed.

Winner: Moto 360 - The Android handset is compatible with a multitude of handsets whereas the Gear S can only be used in conjunction with a a handful of Galaxy devices.

The Motorola Moto 360 has a built-in accelerometer and a heart rate sensor capable of collecting information. Everything else has to be sent to the watch by a phone via Bluetooth.

Samsung has taken the opposite approach with the Gear S, squeezing in an accelerometer, heart rate sensor, GPS, altimeter and even a UV sensor to inform the user when they should be applying sun cream

The Gear S also has space for a SIM card in the back and can be connected to devices via Wi-Fi, giving it the feeling of a standalone device. 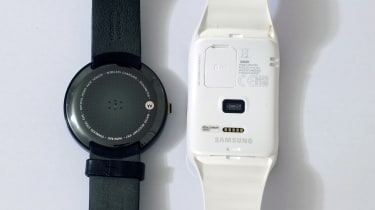 The Samsung Gear S is better-equipped for exercise tracking than the Moto 360. Where the Motorola is designed primarily to be used as a smart pedometer, the Samsung offers offers constant heart rate tracking throughout a walk, run, hike or cycle via the S Health app. There are separate modes for each of these activities, each offering a different interface and tracking style. 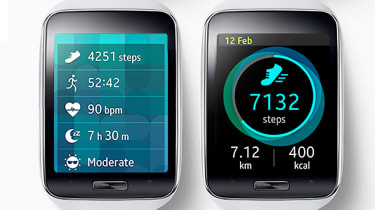 Built-in GPS means the Gear S is able to provide superior location and distance readings, too. The Moto 360 needs to use the GPS on a phone and extrapolates distance using the accelerometer, measuring each jog of the watch as a stride.

Neither watch is on-par with a dedicated fitness device. The Motorola Moto 360 HR sensor generally fails to report heart rate during exercise, because it has trouble dealing with the complex movements. The Gear S also appears to use a fair amount of guesswork between successful readings.

Winner: Gear S - The incredible wealth of sensors in the Samsung Gear S let it function as an almost-standalone device after apps have been installed.

Both devices use 512MB of RAM and have 4GB of internal storage. The main difference is in the choice of processor. The Gear S uses a Snapdragon 400 processor, which is found in smartphones such as the Moto G. Motorola uses a dated TI OMAP 3 CPU in the Moto 360, which isn't quite as power efficient.

The Gear S has smaller 300mAh battery when compared to the Moto 360 (320mAh), but the Samsung device lasts longer.

We carried out a couple of tests to see how the watches performed. The first was a light-use test where the devices were used to receive notifications from a connected phone. 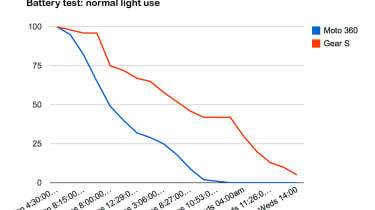 Stamina was also tested with more intensive use. We used both devices to measure heart rate during a 60 minute gym session. Here the Gear S was more useful, because the Motorola did not have an inbuilt app to consistently monitor HR over a longer time.

The Gear S lost seven per cent of its power, whereas the Motorola Moto 360 used up 13 per cent battery doing the same task. 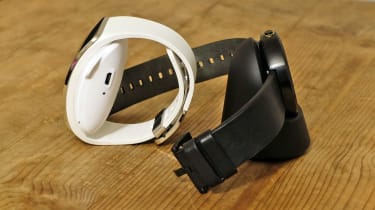 In its favour, the Moto has a more convenient charging system. It uses a neat Qi wireless dock and the battery starts charging once the watch is in place.

The Samsung Gear S has an uglier charging dock, which it needs to be clipped into with force. It does have an ace up its sleeve, though. The dock also acts as an external battery, providing a second charge without needing a power socket.

Which is better value?

The Moto 360 is the cheaper of the two devices, costing 186, whereas the Samsung Gear S is nearly double the price at 330.

We prefer the design, compatibility and actually wearing the Moto 360. However, the Gear S offers the better display, more sensors and longer battery life.

Android Wear OS is likely to become the more useful smartwatch OS over time, but this first generation Moto 360 is going to become obsolete quickly because of the lack of hardware. If you're content with receiving notifications and having minor fitness tracking capabilities, the 360 will suit your needs.

If you want as much functionality on your wristwatch as possible, the Gear S is the better device. Just remember you'll need a Samsung handset to get the most out of it.