We take a look at BlackBerry's unique square smartphone 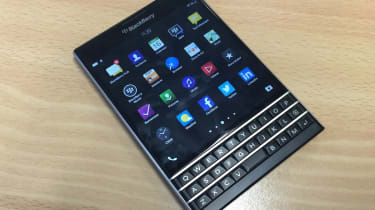 BlackBerry is perhaps one of the saddest casualties of the great smartphone arms race. Once the be-all and end-all of mobile technology (and arguably the progenitor of the modern smartphone), BlackBerry has fallen from favour in recent years.

This is a real shame, because the company still makes rather excellent devices, particularly for business users. Not only does it still have a sterling reputation for security and management options, BlackBerry is the only company still making phones with physical keyboards - and there's really nothing better for typing out long business emails.

The Password differs significantly from most handsets on the market because of its shape. The unique 12cm x 9cm square screen is undoubtedly this device's unique selling point, with BlackBerry throwing away the rulebook when it comes to the traditional rectangle.

But with big swings comes divided opinions, and the look of the Password has indeed caused much debate among BlackBerry fans. A somewhat Marmite-esque option, then, the increased width of the screen does make it ideal for reading long passages of text. 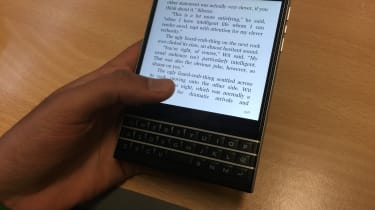 The 1440 x 1440 resolution and 700 cd/m2 brightness are also big plus points of the unique smartphone, and again make it easier to read on the device. That's good, because video is a much trickier proposition. Due to the display's square shape movies, Netflix or YouTube will appear with those unattractive black borders on either side.

The issue of portability should also be noted, as not many people will be able to fit the oddly-shaped device in a trouser pocket, and the hefty phone weighs in at 196g - heavier than most. Single-handed use is almost impossible because of its size, and anything as simple as texting will require both hands.

Sitting in the pros column is the Passport's sturdiness and general quality, and long-time BlackBerry fans will appreciate that the company has kept the classic business-like appearance that instantly feels at home in the boardroom.

BlackBerry 10's interface is designed to give you quick access to your most commonly used apps. The home screen is made up of ever-changing preview windows. Tapping on these panels allows you to pick up where you left off.

BB10 differs from Android and iOS, especially when it comes to navigation. There's no home or software buttons - so everything relies on swiping from the edges of the screen. 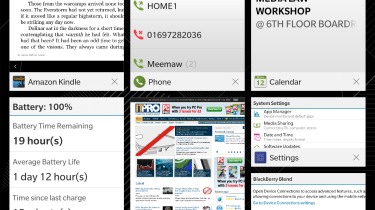 Don't worry if you're new to the OS, because you're provided with a tutorial when you boot up the device and this can be revisited at any time from the app screen. It's pretty intuitive and you shouldn't find any problems getting up to speed with the gesture control.

To help businesses deploy BlackBerrys to employees, the device also supports features like BlackBerry Balance. This allows 'personal' and 'work' profiles to be created - so confidential information can be sandboxed in a safe environment and altered without affecting personal content.

This remains the best messaging aggregation hub on any mobile OS. The BB Hub syncs your emails, IM and social media accounts into one easy to access place. You can get to the Hub at any time by swiping in an inverted 'L' motion from the bottom of the screen regardless of which app you're using. 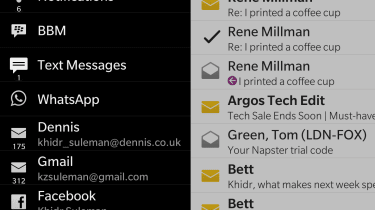 Download Facebook or Whatsapp, for example, and it will automatically pull your conversations into the Hub - and you can jump straight into the app from there.

There's a Priority area too - so you can assign important contacts to make sure their messages aren't buried in a busy inbox.

In order to fit its signature physical keyboard onto the Passport's unusual chassis, BlackBerry has had to make some design changes. The keyboard has been cut down to three rows, in order to accommodate the 4.5in display. The physical keys are used exclusively for letters, with punctuation and numbers popping up on the touch screen when you start typing.

We found the new positioning of the spacebar to be problematic. It's now on the same row as the letters, whereas on previous models it was always placed underneath. On the Passport, the spacebar is now where BlackBerry users expect to press the letters "b" and "n". 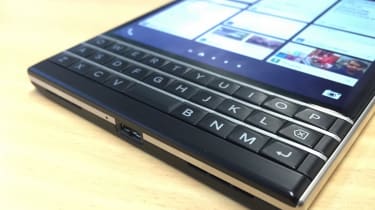 Despite using the Passport for a few weeks, I feel like I'm not typing as fast as I could be. Touchscreen keyboards have come a long way and with apps such as Swype dominating the market, you may find physical keys aren't needed.

On a positive note, the keyboard is touch sensitive, which means it can be used to scroll within documents and web pages. This is a nice touch as it means you don't end up blocking content on screen with your fingers.

The OS is powered by a 2.2GHz quad-core Snapdragon 801 processor and 3GB of RAM. Every Passport ships with 32GB of internal storage and also supports micro SD cards (up to 128GB in size), so storage space won't be a problem. To access the micro SD and SIM card slots, you need to unclip the top of the device - this is secured in place so don't be afraid to use a bit of force to prise it off. 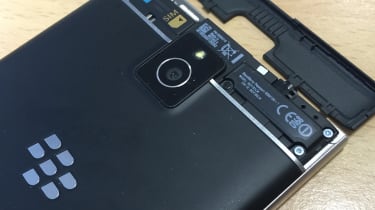 On the rear, there's a 13-megapixel snapper with autofocus and optical image stabilisation.

Wireless connectivity is comprehensive too with 4G, Wi-Fi Direct, NFC, Bluetooth 4 and Miracast all included as standard. When it comes to transferring content, there are plenty of options with the Passport, many of which work cross-platform.

This feature allows you to access your phone's data and messages on your Mac or Windows machine. You can sync up the Passport via a USB cable or through a connection to the same Wi-Fi network. 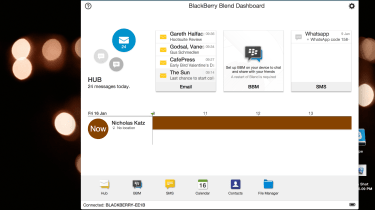 When your phone and computer are connected, a BlackBerry Blend Dashboard pops up on screen. This shows emails, BBM and text messages as well as Calendar appointments. You can respond to messages from the dashboard should you choose to.

We could drag files onto the Passport using the File Manager in Blend. However, to take files off, we had to use the device as a mass storage device.

One of the standout features is the battery life, thanks to the gigantic 3450mAh battery pack powering the Passport. That's larger than the batteries found in phablets such as the Note 4 (3,220mAh) and the Nexus 6 (3,220mAh), which have screens that are over an inch bigger. 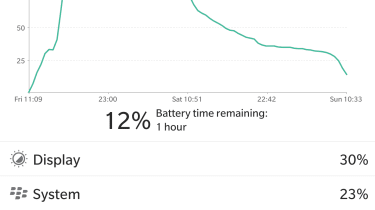 This translates to excellent battery life. With moderate usage expect to stretch the battery life to over 48 hours. Even if you're hammering the device during the day with multiple email accounts synced up, you'll make it through the working day. We've been averaging 30 hours on a single charge.

Apps are no longer a massive problem because you can dip into either the BlackBerry World Marketplace or the Amazon App Store. This means you've got more than 500,000 apps at your disposal, so you're more than likely to find the one you need.

Although the interface has limited customisation options, there is plenty you can change when it comes to notifications and how you interact with the device.

To set up custom notifications for contacts go to Settings > Notifications > Contacts. It's then possible to assign unique ringtones as well as alerts for emails, texts and other messages.

We like the Advanced interactions too. From this menu, it's possible to do the following: 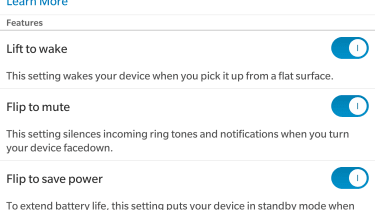 This has been a weakness of previous BlackBerry handsets with keyboards, primarily because the screens have been so small. This is no longer an issue with the Passport.

Running the latest version of WebKit, the default browser loads pages in a couple of seconds.

BlackBerry's default browser also remains one of the few to retain support for Adobe Flash on mobile devices. You need to activate it in the browser menu by going to Settings > Display & Actions. Whilst the web is transitioning to HTML5, having the option to view Flash content on the move is useful. 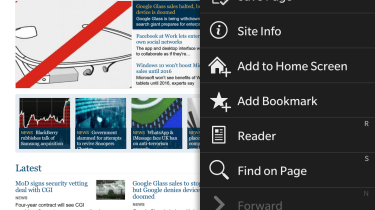 You can add pages to the Home screen for quick access, enable a Reader Mode to get rid of clutter and even save pages. There are even one-click keyboard shortcuts for actions like 'refresh' and 'find on page'.

The Passport provides all the functionality you'd expect from a high-end device. It's got one of the best reputations for security in the business, and it's one of the few manufacturers still offering a physical keyboard. It may not be enough to pull BlackBerry's hardware business back from the brink, but it's a great device that's likely to be a hit with fans.