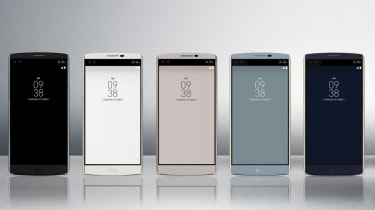 The LG G4 started retailing in the UK earlier this year. While it is cheaper than similar offerings from Samsung and HTC it's not a keenly priced as smartphones from OnePlus or Motorola. But on the horizon is its successor; the LG G4 (V10), which was officially announced at the beginning of October.

27/10/2015: Android M for the LG G4 has been posted on XDA, along with a recovery flash, just in case things don't go to plan. The update is designed for the international unlocker version, with the model number H815. It's available as a KDZ file and is also available as flashable files for those with TWRP custom recovery already.

The files available in the TWRP custom recovery are for the system, bootloader, boot partition, and modem.

Although there's no word this is the official' release of Android Marshmallow for the LG G4, the build posted by autoprime seems to be very close to the update Lg will be rolling out later this week.

The Marshmallow update won't change the LG G4's skin, and is a pretty light update overall.

21/10/2015: According to our sister publication Know You Mobile, The LG G4 update to Android Marshmallow should arrive on handsets sometime this week.  Android Marshmallow will begin rolling out in Poland early this week. Additional European states, the US and parts of Asia will get the update shortly thereafter.

The latest update to the Android operating system offers a number of features designed to enhance the user experience.

Permissions have been simplified with greater control of the information applications can access, not only at the installation stage but anytime. There is a silent feature for sound and vibrate mode as well as a Do Not Disturb mode to block all sounds or only alarms and notifications. Doze Mode shuts down background processing of certain apps when the phone is not in use, to significantly prolong battery life.

09/10/2015: It looks like the successor to the LG G4 is nearly out. Dubbed the LG G4 Pro (or LG V10 in some countries), the smartphone is set to come out by the end of the year, possibly later this month. However, no firm date has been set.

According to LG: "The LG V10 will be available in Korea starting this month followed by markets such as the United States, China and key countries in Asia, Latin America and the Middle East. Information regarding additional markets and launch dates will be announced locally in the weeks to come."

07/10/2015: According to this report from Gottabemobile, The LG G4 is to be upgraded to Android Marshmallow, shortly after its Nexus devices get the update. However, the phone maker is playing its cards close to its chest as to when, if ever, this will happen.

No release date has been set for the UK at the time of writing for the LG G4 Pro, despite it being announced for the US. Lg has reported it will arrive in the company's native Korea first (no surprise there, then), followed by key markets. The LG G4 was released back in April.

The LG G4 sports a slightly curved screen with an optional leather backing. Inside, the phone features a Qualcomm Snapdragon 808 chipset with Hexa-core processor, Adreno 418 GPU and 3GB RAM. The stock OS is Android 5.1 Lollipop with LG UX v4.0 tweaks. The phone has a 5-inch QHD Quantum Display IPS LCD screen with 534ppi and Gorilla Glass.

There is also 32GB built-in memory and with an expandable card slot, Dolby mobile sound improvement and a 3000mAh battery.

The V10 is a higher-end phone than its LG G4 brethren with a frame composed of SAE grade 316L stainless steel. A Dura-Guard frame surrounds the device to protect the phone from bumps and knocks; this has been rated MIL-STD-810G Transit Drop Compliant for shocks. There is also a Dura Skin coating on the back and bottom of the display.

In addition to the primary display, a second 2.1in IPS panel sits just above the main screen with a matching 513ppi pixel density. This is always on, even when the other display is on standby. LG claims this won't affect battery life. This second screen is used to show weather, time, date and battery icon or app shortcuts.

The LG V10 has two front cameras, capable of capturing wide-angle selfies of up to 120 degrees without having to pan the smartphone. These cameras can be paired with the 16-megapixel camera for a feature called Multi-View recording that lets a user record a scene from all angles, letting them pick the best one.

There is also a manual mode for video that allows adjustment of shutter speed, frame rate, ISO, white balance, and focus, all while recording video.

The LG V10 comes with 64GB of onboard storage and supports microSD card expansion up to two terabytes. The V10 has 4GB of LPDDR3 RAM, as opposed to the G4's 3GB.

There is also a removable 3000mAh battery that LG claims will only take around 40 minutes to get to a 50 percent charge, this is due to the device supporting Qualcomm's Quick Charge 2.0 technology.

There has been no official word for the UK street price for the LG G4 Pro, but the phablet will retail in South Korea first for 799,700, or approximately 457. It is very likely that the UK the price would be significantly north of that figure.

This article was originally published on 2/2/15 and was subsequently updated (most recently on 27/10/15) to reflect new information about the LG G4's update to Android M and release of the LG G4 Pro in the US.