LG positions its own luxury smartwatches as Apple Watch competitors 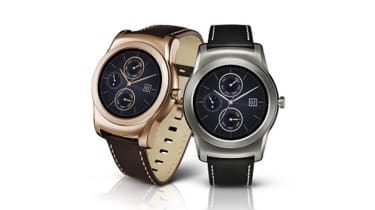 The latter device is essentially an LTE-enabled variant on the base model, but there's a few other important changes present too.

For example, the Android Wear OS that most smartwatches run on is nowhere to be found. The LTE device instead runs on a proprietary platform, based partially on the company's WebOS system, which likely means a much more limited selection of apps and watchfaces.

The LTE capabilities included with the beefed-up model mean that the phone can handle tasks such as calling, texting and using apps without needing to be tethered to your smartphone, though, instead using its own 4G connection.

It's also equipped with NFC, meaning it can handle the increasingly prevalent world of mobile payments.

In terms of specs, it's carrying a quad-core processor, a 1.3in touchscreen, and a heartrate monitor. It's likely to be more expensive than the standard, non-LTE version as well.

LG is positioning both devices to compete with Apple's own high-end smartwatch, the Apple Watch.

The LG Watch Urbane will be available to consumers in both silver and gold variations, and will continue the company's approach of designing wearables to resemble traditional items, such as the current G Watch R.

Juno Cho, president and CEO of LG's mobile division, said: "The LG Watch Urbane's classic design and smart features make it the perfect smartwatch to complement our G Watch and G Watch R, which were designed as more casual and active devices.

"LG Watch Urbane is an important part of our strategy to develop wearable devices that are worn and viewed as everyday accessories, not electronic gadgets."

As Cho states, while previous smartwatches released by the company have a fitness and activity focus, the Urbane watch will lean towards "more formal" use, as the company describes it. The thinner profile also makes it suitable for both men and women, "for wearers looking to add both style and high-tech flare to their everyday lives."

Like the G Watch R, the new device will also sport a PPG sensor for users to measure pulse and heart-rate while exercising.

The watch will have a 1.3in full circle P-OLED display, stainless steel body, natural leather strap, and will be powered by a 1.2GHz Qualcomm Snapdragon 400 chip.

It will be compatible with phones running Android 4.3 and above, with pricing to be confirmed later.

According to The Verge, the LG Watch Urbane LTE will have a 700mAh battery, NFC and smart wallet functionality, a heartbeat sensor, GPS and more.