Six years after applying for it, Apple's finally secured a patent that could see it move into the realms of virtual reality 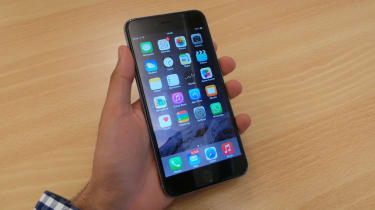 Apple has secured a patent that could pave the way for it to create a virtual reality headset for iPhone users.

The consumer tech giant was awarded the patent yesterday, described as a "head-mounted display apparatus for retaining a portable electronic device with display", having first applied for it way back in September 2008.

The patent document describes a set-up that would see an Apple iPod or iPhone connected to the head-mounted device so that, when worn, it displays the contents of the smartphone or MP3 player's screen in front of the user's eyes.

"Such a configuration can allow the user to view the media on a private display, while the media is provided by a personal handheld device," the patent document reads.

The accompanying images, within the document, show a thickset pair of glasses that an iPhone or iPod could slot into.

If or when Apple will bring the offering to market isn't clear, particularly in light of comments made by the company's CEO in a recent New Yorker profile of the firm's senior vice president of design, Jony Ive.

According to the article, Apple CEO Tim Cook is not a fan of the technology, and claims to have had an inkling that adoption of it would be slow.

"We always thought that glasses were not a smart move, from a point of view that people would not really want to wear them. They were intrusive, instead of pushing technology to the background, as we've always believed," he said.

"We always thought it would flop, and, you know, so far it has."

His comments come after Google withdrew Google Glass from sale amid rumours of a redesign.