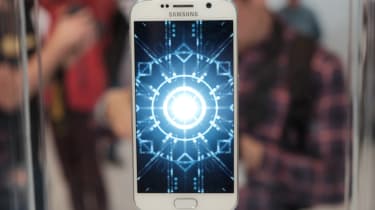 Launching on the 10 April, the Galaxy S6 and S6 Edge aim to continue Samsung's dominance in the mobile market.

Samsung has made a number of changes and we take a look at 15 features, which differentiate the S6 handsets from its predecessor:

The S6 also marks the debut of Gorilla Glass 4, which Corning claims is 2x tougher than competiting glass on the market.

2 - On the S6 Edge, the curved screen allows you to see notifications and messages from contacts. When the device is face down on a table and the phone rings, you'll also be able to tell who's called thanks to the colour code system.

3 - Samsung has used a metallic unibody design instead of plastic. The firm also claims the material has been treated to make it "80 per cent stronger" than competing unibody handsets.

4 - Unlike the Galaxy S5, the S6 devices are not certified to be waterproof or dustproof.

5 - Micro-SD support has been dropped too. Users will have a choice between 32/64/128GB of on-board storage.

6 - Samsung has teamed with Microsoft to offer 115GB OneDrive storage for 2 years.

7 - Battery packs are no longer removable. However, charging the S6 for 10 minutes will provide 4 hours of general usage or 2 hours of HD video playback. Wireless charging is built-in, with charging pads sold separately.

9 - Double tap the home-button and it will now launch the camera app - Samsung is touting an average startup time of 0.7 seconds.

11 - Samsung Pay will be accepted at 90 per cent of retail stores across the US without vendors needing to install any special equipment. This is thanks to the use of MST (magnetic secure transmission) technology. S6 users will be able to authorise purchases using the fingerprint reader on the home button.

12 -  When a phone-call comes in and you're busy, pressing the heart-rate monitor will automatically send a pre-configured text message to the caller.

13 - Samsung will ship all its devices with a custom-made 64-bit Exynos processor. It's the first 14nm chip to be included in smartphones and has eight-core (4-cores at 1.5GHz & 4-cores at 2.1GHz). The firm claims this is 35 per cent more efficient than the processor used in the Note 4.

14 - TouchWiz has been updated to give it a cleaner look. Where possible icons have been replaced with text commands. Samsung also claims there's 40 per cent less bloatware installed.

15 - Samsung Knox will be preloaded and it will integrate with two new BlackBerry enterprise services: WorkLife and SecuSuite.

Meanwhile, SecuSuite is designed for to provide "virtually tap-proof" voice and SMS communications.