This year's MWC in Barcelona was largely about incremental upgrades... and IKEA furniture 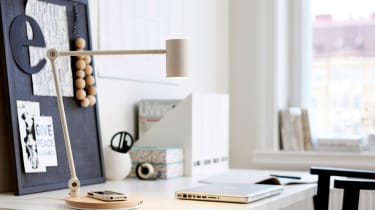 Turn the corner from the Fira convention centre in Barcelona, home to the annual Mobile World Congress, and you're greeted with the sight of a branch of IKEA.

The Swedish furniture chain's ubiquitous blue and yellow shed is just one of the businesses based in the immediate vicinity of Barcelona's relatively new conference venue the area still has some way to go, when it comes to regeneration and serves as a useful refuge for industry figures and journalists tired of Mobile World Congress' catering queues.

This year, though, there were more reasons to head to IKEA than coffee and meatballs. The furniture maker used Mobile World Congress to launch its QI-compatible range of "smart" furniture, starting with wireless charging points for smart devices.

The charging pads come built in to desk, floor and table lamps, and bedside tables. The JYSSEN wireless charger continuing IKEA's tradition of product names that challenge any non-Swedes can also be bought as a component, and integrated into other furniture, such as the company's office desks.

The firm is bringing out a three-port charging pad, NORDMRKE, specifically for the office market. And IKEA is launching QI-compatible charging covers for handsets such as the iPhone and Samsung S5, which don't have wireless charging built in.

IKEA says it launched the furniture as part of a long-term commitment to smart home technology, and by extension, to the smart office. IKEA is already a significant supplier of furniture to businesses, from offices to cafes. And its move into smart technology is hardly surprising. In Sweden, the company already offers a range of green energy products, and even entire, prefabricated houses.

Here, IKEA expects to start selling its QI-compatible furniture from April, and it's almost inevitable that the system will find itself into plenty of office lobbies and meeting rooms, many of which already have IKEA fittings. And it may well prompt office managers, and IT directors, to give wireless charging a go.

But the interest in IKEA's new range of furniture contrasts with a Mobile World Congress that, otherwise, seemed focused on incremental updates.

Some of the products on show this year had a distinctly consumer feel to them, from "drone" aircraft to various accessories and software aiming to make it easier for smartphone owners to take "selfies". A few companies pressed on with virtual reality headsets, although Microsoft failed to provide much more detail on its plans for its HoloLens headset.

Analysts, for their part, pointed out that tablet sales have started to tail off, perhaps as smartphones grow in size, and Samsung engaged in a war of words with Apple which was not at the show about the quality of smartphone cameras.

Overall, the message from MWC this year seems to be one of gradual improvement rather than quantum leaps in functionality. Unless, of course, you're planning to pop some flatpack furniture into the car.