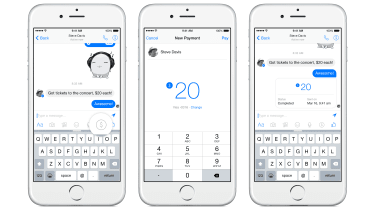 Facebookplans to let users of its Messenger app transfer money to friends.

People must enter their Visa or MasterCard details into the app first, however, along with a Facebook-specific PIN, to take advantage of the service.

To send money, users can tap on a dollar sign while chatting with friends using the app.

Money transfer will be available initially only to US users of the app on Android and iOS devices, such as the iPhone and iPad.

Users of later iPads and iPhones can use Touch ID for added security.

The new feature puts Facebook in competition with payment services such as PayPal andGoogleWallet, withGoogle recently rolling out a money transfer service via Gmail.

The mobile payments market ishottingup with a number of entrants, including rival messenger app Snapchat, whichteamed up with Square to offer users an easy way to transfer cash last November.

Facebook hopes its own feature could allow it to dominate the market, with around 1.2 billion people using the social network, and another 500 million using the Messenger app.

The firm was keen to stress that the new feature would be secure.

"We use layers of software and hardware protection that meet the highest industry standards," Facebook said in ablogpost.

"These payment systems are kept in a secured environment that is separate from other parts of the Facebook network and that receives additional monitoring and control. A team of anti-fraud specialists monitor for suspicious purchase activity to help keep accounts safe."

Kevin Dallas, chief marketing officer atWorldpayeCommerce,said the addition of money transfer features to Messenger was no surprise, but said people may fear such a service being embedded into a social network.

"Many people however still have concerns about security online with identity fraud rife using data cribbed from social networks and, until these fears are put to bed, this will be a big barrier for the wholesale adoption of this technology," he said.