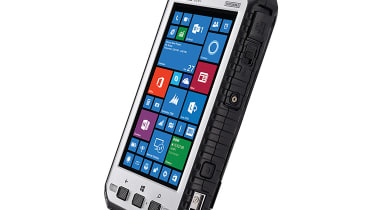 There aren't many options for businesses that need hardware to withstand tough outdoor conditions, which is why Panasonic's Tough range has proved so successful. Its latest product, the FZ-E1, is one of its most durable devices yet despite it being a tiny tablet.

The 5in screen means the FZ-E1 can't offer as much real estate as mainstream rivals, but Panasonic says it's the toughest tablet ever made. That's bound to attract attention.

The exterior means business. The screen is surrounded by a thick grey border, a litany of sensors and a trio of heavy-duty buttons, and the edges are made from thick, matte plastic. The ports and sockets are hidden behind flaps that protect the various connectors from water and dust.

The top and bottom ends have hooks for attaching carry straps, and the rear houses the hot-swappable battery and removable camera unit.

The hard-wearing design and MIL-STD-810G testing means the ToughPad functions in demanding scenarios. It can work after being dunked in five feet of water for thirty minutes, or after falls of up to ten feet onto concrete. The ToughPad is fully sealed against dust, and it's been tested for shock, vibration, altitude and extreme humidity.

Panasonic has ensured the FZ-E1 can withstand temperatures ranging between -20C and 60C by fitting a tiny heater inside, and the screen's glass can withstand a 400g steel ball dropped from 80cm.

The power connector and microUSB socket are hidden behind a locked flap, and the same side houses a dedicated camera button. The opposite edge has a volume rocker and a customisable button. A docking port for accessories dominates the bottom, and at the top is the power button and a headphone jacket behind another flap.

It's the toughest tablet we've ever seen, but it's not all good news. The FZ-E1 is 32mm thick at its bulkiest point, and it weighs 426g. It's bigger than any other small tablet and that's before any cases or accessories have been added.

The ToughPad doesn't just impress with its degree from the school of hard knocks it's practical. The battery is hot-swappable, and Panasonic claims it'll regain 50 per cent of its capacity after just an hour of charging. Its dual-SIM, 3G and 4G options are available, and it's got dual-band 802.11ac Wi-Fi, Bluetooth 4.0 and GPS as standard.

NFC is inside, and the two front-facing speakers can pump out 100 decibels of sound. They're certainly loud, even if quality is lacking the top-end is tinny, the treble is thick and without nuance, and bass is weak. These speakers aren't good enough for media, but their volume and the in-built noise-cancelling features make them fine for listening to voice calls in loud environments. 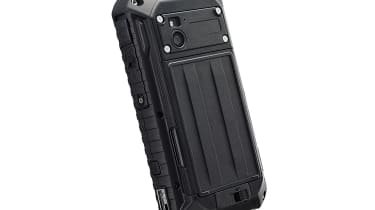 Processing grunt comes from a 2.3GHz Qualcomm quad-core chip alongside 2GB of memory. It's a good specification that scored 503.7ms in the latest SunSpider benchmark. That's good speed: better than both the Nexus 7 and Nexus 9, and faster than the latest iPad Mini.

It performed reasonably in the Peacekeeper HTML5 browser test. Its result of 531 points beat the latest small iPad, but couldn't match the 568 scored by the Nexus 7.

It's enough power to help the ToughPad blast through the vast majority of applications we didn't hit any problems during our tests. Windows worked without delay, and we can't see any customised apps made using Panasonic's APIs proving problematic either.

The battery is fantastic for starters, its 6,200mAh capacity is more than 2,000mAh larger than the Nexus 7's power pack, and it's only a little smaller than the iPad Mini's battery.

Our standard test plays HD video with the screen at 75 per cent brightness and Wi-Fi off, but Windows Embedded doesn't have precise screen brightness settings. With that caveat and the screen at its Medium brightness level the Panasonic lasted for just over 16 hours in our test. That's almost four hours better than the Nexus and iPad Mini.

At first glance the ToughPad's OS looks like Windows Phone, but it's actually Windows Embedded 8.1 Handheld. It's built using Windows Phone 8.1, but has key differences that'll appeal to business: APIs can be used to build bespoke software, it's got beefed-up security credentials and it works with Windows Phone 8.1 software and other office tools like Microsoft Dynamics CRM for Retail, Office 365 and Lync.

The FZ-E1's rear serves up an 8-megapixel camera. It's got auto-focus and an LED flash, it worked rapidly in our tests, and its shots are reasonable easily good enough for taking pictures on the job. It struggled a little with bright lights and reflections, and other tablets provide far sharper detail.

The screen is protected from knocks, scratches and the elements, and it's got several other attributes that make it ideal for use in the field. It's matte, and the capacitive surface works with gloved fingers. It's even got a rain-sensing feature that prevents precipitation from activating the panel.

The matte, anti-reflective layer means the Panasonic keeps working under strong sunlight, and the brilliant 476cd/m2 brightness level helps. That's not far away from the Nexus 7's 540cd/m2 measurement, and far better than the iPad Mini's 389cd/m2. The black level of 0.45cd/m2 is a tad better than the Nexus, and it means the two devices actually have the same contrast ratio a stonking 1,058:1.

That's impressive, but in other areas the Toughpad doesn't match up to rivals. The 5in screen is smaller than most smartphones, and its resolution of 1,280 x 720 isn't much cop even cheap hardware often provides more pixels.

Viewing angles aren't great, with colours that quickly lose their vibrancy when the panel is seen from an off-centre angle. Those colours aren't as vibrant as those on rivals to begin with the Nexus 7 and iPad Mini are both noticeably punchier.

Those issues mean this screen isn't the best for viewing media, but there's no denying its chops for getting work done in tough conditions. It's got ample brightness, a matte coating, and it's even set up to work in the rain or when you're wearing gloves.

Panasonic has worked hard to make the FZ-E1 versatile. A second hot-swappable battery can be purchased, and the ToughPad's online configurator allows the optional Magstripe and barcode readers to be added to the specification.

Hand-straps with styluses, belt holsters and other carrying accessories are available, and charging cradles can be used to charge a group of FZ-E1 tablets or their batteries. It's even possible to buy a powered cradle that can be used inside cars and vans.

Panasonic also produces an Android version of this machine, called the FZ-X1. It's got a similar configuration to this machine, and the same rugged features, but it's also got an older version of Google's OS Android 4.2.2, to be precise. That model costs 1,133.

For all of its rugged features and clever design, the ToughPad FZ-E1 is still uncomfortable on a couple of counts. For starters, it'll have trouble fitting into most pockets and, more seriously, it'll cost you almost 1,200. That makes it several times more expensive than every rival.

Crucially, though, Panasonic's latest justifies its cost in key areas. It's got good power, a phenomenal battery and rugged features that no other tablet can offer. Panasonic has designed the FZ-E1 to appeal to workers in military, medical and other demanding industries, and they'll be able to justify its cost and make use of its features but, for most of us, it's overkill.

In certain industries, the cost can be justified, but it's overkill for the ordinary consumer.