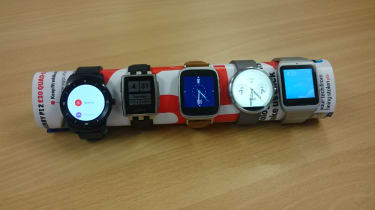 Asus, generally known for its mid-market laptops and tablets, have decided to make their debut into the smartwatch world with the ZenWatch, and we have to say, it's a promising start. It's let down a little in some areas, but a few wobbles notwithstanding, it's a lot stronger than we would have expected. 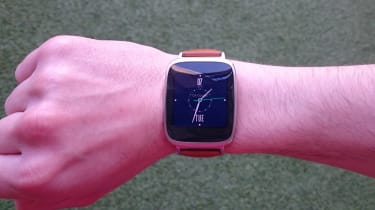 The ever so slightly curved body is reasonably understated, with a copper-coloured inlay around the sides and few unnecessary flourishes. We have to say, it's fairly attractive in an almost vintage way. The interchangeable 22mm strap also means that you can customise the band to suit your own tastes.

While the ZenWatch's induction-charged battery is more or less adequate, it's by no means anything to write home about. Judicious use of screen-dimming and lower brightnesses will see it last around a day and a half, but don't expect it to last more than a full work day with heavy use.

Operations on the ZenWatch are faster and smoother than we were expecting - it's actually pretty nippy. Although it does suffer from precision issues brought about by its smaller screen.

We found the ZenWatch totally comfortable, with the default band easily adjustable in terms of size. It's not the slimmest we saw, but it's thin and sleek enough that it's not going to be at all obtrusive. 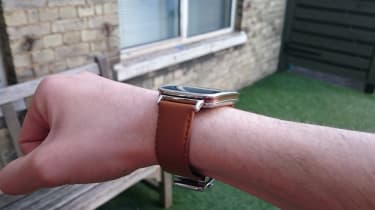 Asus has an own-brand fitness app for those looking to track their steps throughout the day, but it's a little limited. It also comes with Jawbone's Up app, however, which is more comprehensive. One interesting feature of Asus's software is the supposed ability to measure your relaxation level along with your heart rate, but since it just gives an uncontextualised number, this is somewhat less than useful.

Like most of its competitors, the ZenWatch is sticking with a price of roughly 200. However, considering it hasn't really got anything to make it stand out from the herd, we'd be hard-pressed to recommend it over similarly-priced rivals.

The ZenWatch's quare screen suffers from the same size+shape-related problems as the SmartWatch 3 the dead space around the screen spoils the device's otherwise well-designed look, and navigation can be tricky for the ham-fisted among us. The ZenWatch can't match P-OLED rivals for brightness, but the colours are a lot less washed-out than the Sony Smartwatch 3, and overall it's pretty respectable. 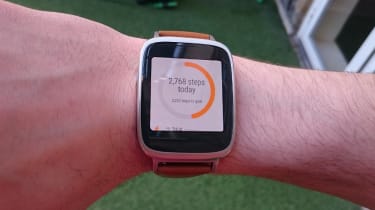 The Asus ZenWatch can't really be said to do anything wrong; it's competent on pretty much every level. However, that's pretty much the most positive thing we can find to say about it. You're unlikely to be disappointed with the ZenWatch, but equally, we highly doubt anyone will be overly wowed with it, especially when its superior competitors cost around the same price.

Calling the Pebble Steel a smartwatch seems a little disingenuous. It's got a battery of smart features of course, but looking at the blocky, black-and-white display, it looks more like something that'd be cutting-edge circa 1998. That being said, however, it's got buckets of character, and we can't help but love it. 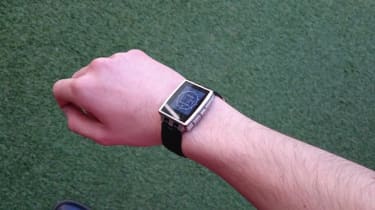 The Pebble Steel sports what is, in our eyes, a very attractive square design, not all that different from a high-end digital watch. Sure, it's a bit angular, and the buttons are on the chunky side, but it's got a certain almost vintage mystique to it. While the original Pebble features interchangeable bands via the standard 22mm strap fitting, the Steel currently only offers leather or metal options. However, both look rather effortlessly elegant, so it's hardly a problem.

Battery's one of the big features that the Pebble Steel has on its side. Unlike its power-hungry rivals, the Pebble Steel can comfortably last around a week from a full charge, thanks largely to a black and white screen and low-power internals. Charging is via a proprietary magnetic induction cable, which can be a little tricky to attach securely, but once it's on, it feels fairly stable.

Pebble's smartwatches use a custom OS, which works across both Android and iOS no Windows Phone support as yet, unfortunately. It pairs with your smartphone via Bluetooth connection and a companion app, which also houses a storefront for apps and watchfaces. While neither are as sophisticated as Android Wear's equivalents, there are nonetheless a fair few useful apps, as well as some charming watchfaces. 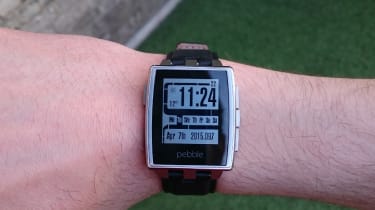 The Pebble uses Physical buttons rather than touch or voice controls. This actually means it's a lot more straightforward to control than some other devices we tested having an organised menu structure is incredibly helpful after the somewhat alien layout of Android Wear. The rudimentary nature of the Pebble also means that it's incredibly quick to navigate between apps and watchfaces.

Admittedly, the Pebble Steel isn't quite as ergonomically-shaped as some we tried, but it's perfectly comfortable, even when compared with analogue rivals, both in terms of weight and size. We could easily wear it for days at a time, which we wouldn't necessarily say of the others on this list. 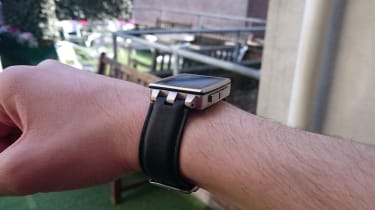 All push notifications are supported by the Pebble Steel, with a variety of response actions depending on the type of notification in a similar way to Android Wear. Many third-party apps are also supported, including evernote and runkeeper. However, the watch can only store eight apps and watchfaces at a time, with additional ones needing to be swapped in via smartphone.

Available for around 150, the Pebble Steel is one of the cheaper smartwatches on the market. However, it still isn't quite as cheap as we might like, given its comparatively underpowered nature. On the flipside, since it's practically retro already, it's almost certainly going to age a lot better than flashier competitors. A good rule in tech is that the fancier it is, the quicker it becomes embarrassingly obsolete.

The square LCD e-paper' display is actually surprisingly effective. Although the Smartwatch 3 and ZenWatch both have larger, higher-resolution screens, the fact that the Pebble is controlled via physical buttons rather than touch means that a small screen isn't a problem. Granted, image quality (such as it is) would embarrass a palm pilot, but sterling contrast ensures text is perfectly clear and readable with a brief glance. 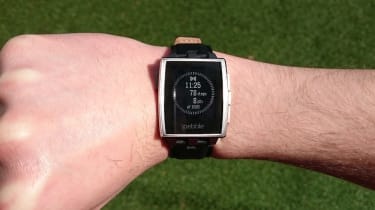 A lack of voice command is really rather tedious, particularly when trying to reply to messages. However, the ability to pre-select up to five custom responses to instantly use is a nice touch. The Pebble Steel also has another trick up its sleeve, though. Like more grown-up' timepieces, the Steel is water-resistant to a depth of 50 metres, which is a good deal more than its more technologically sophisticated brethren.

In today's world of QHD screens and touch control, the Pebble Steel is something of an oddity. It's a charming one, however, and there's an awful lot to love about this quasi-throwback.

If you're not bothered about having any of the high-tech frills of Android Wear, then the Pebble Steel will suit you down to the ground. On top of that, the battery life is long enough to put most smartphones to shame.

We hummed and hawed between this and the Moto 360 for ages. They're both exceptionally capable devices, with distinct and appealing visual flair. However, in the end, the G Watch R just managed to cinch it. 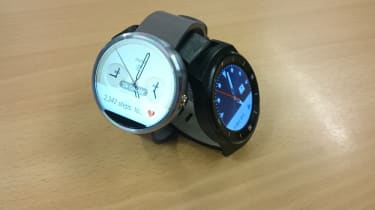 It's got better battery life, which is always a winner. It's also got a faster processor than the 360, which was occasionally a little sluggish, and we think it looks just that little bit more dashing. The Rolex-esque bezels made us feel appealingly Bond-like when using the voice command, and we're suckers for the cool factor'.

The astonishing battery life and waterproofing coupled with a feather-light weight make this little beauty a strong contender for our favourite smartwatch ever. I could be a little cheaper, considering the age, but those that splash out will likely be glad they did.

Many of these watches could be old news in a few months. LG already has a successorthe G Watch Rin the form of the LG Watch Urbane, while Pebble's suspiciously Familiar Pebble Time is set to ship to its Kickstarter backers in May. Motorola may also have a second-gen Moto 360 on the way, according to a possible slip-up by the company's CEO.