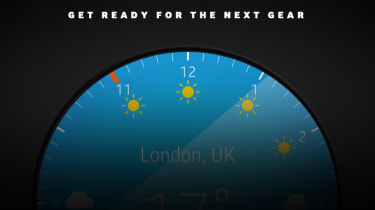 The launch of the Samsung Gear A smartwatch has been announced on its developer website, sporting a teaser image and tagline: "Get ready for the next Gear."

The announcement was spotted first by Pocket Lint, and confirms previous rumours that the watch would have a round face.

More details of the Samsung's next smartwatch release indicate that the device will go up against other premium offerings such as the Apple Watch.

The watch was previously known as Orbis', reports SamMobile, but has now been announced as the Samsung Gear A. It will be available in two versions, according to the site, with one limited to Bluetooth and Wi-Fi connectivity and the other sporting 3G and calling support.

In terms of design, its shape is in line with the Moto 360 and G Watch R, but is a departure from its own rectangular Gear S.

There will be a bezel ring and power button on the top of the watch, and users will swipe down on the homescreen to access a drop-down menu. Swiping up will open the menu of recent apps, with the power button closing it down again.

Other features include rejecting a phone call, a music player, an alarm, clocks, find my device' and weather.

Samsung's previous smartwatch efforts have not been greeted with much enthusiasm, with Apple co-founder Steve Wozniak calling the Galaxy Gear "worthless" last summer.

"I want my smartphone here, but I really want the whole thing... I don't want just a little Bluetooth connection to the smartphone in my pocket because then it's just an intermediary, an extra thing I buy to get what I already have and have to carry anyway," he said.

Our own head-to-head review of the Samsung Gear S and Moto 360 sided with the latter on price, design, compatibility and comfort.