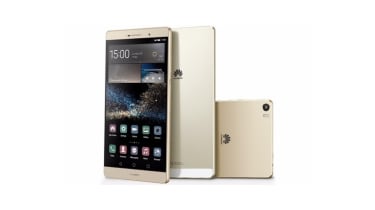 Huawei's last flagship aimed at taking on Android heavyweights like the HTC One M8 and Samsung Galaxy S5. While premium design sensibilities and a good-quality camera won it some points, hardware limitations unfortunately held it back from greatness.

This time, Huawei's latest phone is gunning squarely for the iPhone. Hold it in your hands, and the casual observer could be mistaken for thinking the Huawei P8 is Apple's latest brainchild.

Huawei has once again impressed us with its design chops - the P8 is gorgeous. The aluminium unibody and bevelled edges make it a pleasure to hold, and it's also only 6.18mm thick.

They've actually managed to shave .32mm off last year's P7, which is an impressive feat given how slim it already was. For comparison, the barely-there iPhone 6 is 6.9mm, so when we say the P8 is one of the thinnest phones we've ever seen, it's not an exaggeration.

The P8's IPS panel has been bumped up to 5.2in for the latest model, with a Full-HD 1080p resolution. Not quite as impressive as some of the P8's QHD-sporting rivals, but it's more than adequate in this day and age and looks pretty impressive in the flesh.

The P8 ships with Android Lollipop 5.0, not that you'd know it. It comes with Huawei's own Emotion UI laid over the top of it. It's virtually unrecognisable as Android, which is either going to be a plus or a minus depending on your own personal feelings - visually, it's a dead ringer for iOS, complete with a lack of dedicated apps drawer.

As with the P7, Huawei is still putting a lot of emphasis on the camera. The 13MP snapper boasts "best-in-class" optical image stabilisation and auto-scene recognition, with a goodly amount of extra modes for those that want their snaps to be a little more artistic.

One especially interesting feature is the director mode, which allows the P8 to use up to three additional smartphones as slave camera to produce multi-angle videos, which can then be instantly edited from within the app.

It's also got something called 'perfect selfie' mode which uses facial recognition to automatically enhance your face in group photos. This seems like a sure-fire hit with sociopaths who want to ensure that they look better than all their friends, but otherwise, we're not enthused.

Things are a little more interesting in the spec department. The P8 comes equipped with a Kirin930 Octacore processor. Four cores are clocked at 2GHz for CPU-intensive tasks, with four 1.5GHz cores for less demanding operations.

The P8 uses different combinations of these cores depending on the individual situation, in an effort to boost both performance and battery life. Huawei claim that this provides an 80% speed increase over the P7 - if it can deliver, that would go a long way towards solving its predecessor's primary issues. It definitely feels more crisp and responsive, with apps and interactions loading smoothly and seamlessly.

The P8 comes in both single and dual-SIM variations, with the MicroSD slot pulling double duty as a SIM tray when the expandable storage isn't in use. It's also boasting two antennas, which are designed to prevent users blocking the signal with their hand as part of a system Huawei calls Signal+.

The P8's 2,600mAh battery has a stated life of one day of heavy use, or 1.5 days of normal use. It's not earth-shattering, but it's a perfectly competent measurement, and enough to avoid being a barrier. It's also got a system that blocks apps from draining unusually large amounts of power, which should help.

The P8 still lags behind mainstream rivals in the waterproofing stakes; while it has splash-resistant nano-coating, it's still lacking a proper IP rating that would allow it to be fully submerged. It's a shame, as we're rapidly coming to treat full water-resistance as a must-have feature.

It's got some interesting tricks up its sleeve to compensate, though. A 'loud mode' for taking phone calls in noisy areas, an automatic international dialer to remove the hassle of inputting country codes, and  beefed-up handsfree capabilities to pick up voice from up to two meters away all contribute some useful features to the phone's skillset.

By far the coolest, however, is the 'find my phone' style locator. By using a voice command - "Hey, Buddy" by default - you can wake up your phone. Ask it where it is, and it will light up, vibrate and cheerily proclaim "here I am!".

What's even better is the commands are customisable, so the varied profanities you inevitably exclaim whenever you lose a device could actually help find it.

Overall, the Huawei P8 looks like a cracker of a phone. If it can deliver on its claims of sped-up internals, Android might just have a new member in the Big Boys Club with Samsung, Sony and HTC.