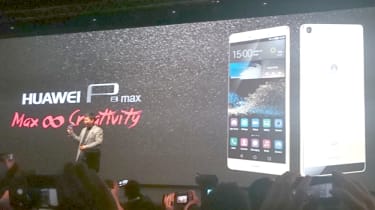 The device, with a gargantuan display measuring 6.8in, is part of the growing trend towards large phones such as the Lumia 640XL and the iPhone 6 Plus.

The P8 Max will launch a month after the regular version, with the first territories able to expect it sometime in May, and comes with two different storage capacities.

Like the more petite variant, the P8 Max is a sleek, attractive-looking piece of design. The bevelled edges make an already-slim device a marvel of svelteness, and it really is very attractive.

This is, of course, based solely on looks. Trying to hold the 6.8in colossus one-handed is a struggle, let alone actually attempting to use it. If you can get past the outrageous size, however, it's a rather beguiling device. 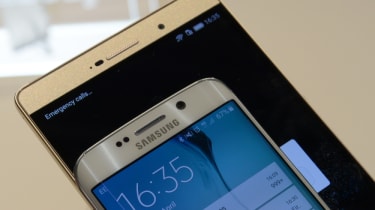 Internally, the device is packing most of the same hardware as its smaller brother. It's still controlled by an octocore Kirin935 CPU, albeit clocked to 2.2GHz this time, and it's still got 3GB of RAM.

The camera's also identical, with a 13MP rear sensor and 5MP 'selfie' camera, in addition to Huawei's veritable avalanche of photo effects and editing software.

What has changed dramatically, however, is the battery. The P8 Max contains a 4,360mAh battery, which promises 10 hours of movie streaming, 15 hours internet browsing or 60 hours of music.

It also claims to last for over two days of normal usage on a single charge. These are good stats, but they're less impressive when you consider that the battery capacity could power a small city state.

The P8 Max comes with dual-sim capability as standard no single SIM version, unlike the P8. However, in order to use a second SIM, you'll have to sacrifice the MicroSD slot and say goodbye to the expandable memory.

The P8 Max's connectivity features are on the more impressive end of the scale. Dual-band Wi-Fi with 802.11 b/g/n/ac capability complement Bluetooth 4.0, LTE 4G and NFC to provide a pretty much complete package.

Everything's basically familiar territory on the software side, too. As with the P8, it runs Huawei's own Emotion UI over an Android Lollipop base. There's a lot to like about the look and feel of the interface, particularly if you're an Apple fan the layout is remarkably similar.

The OS has had a few tweaks to make full use of the larger screen area; users can now multi-task, with different, resizable windows running simultaneously. The landscape view also looks like it's been optimised for more productivity.

Although the screen's had a pretty big boost in size, there's no matching resolution increase. This means that while it's still Full-HD, the pixel density is going to suffer in comparison to the more compact P8.

Huawei is boasting about other aspects of the display, though, with the high contrast ratio, colour saturation and sun view mode' for clear display in bright light all being talking points.

The Chinese firm is squaring up to some of the major big-screen players with the P8 Max, and none more so than Apple's iPhone 6 Plus. In addition to some direct comparisons highlighting the P8 Max's advantages over the 6 Plus including the fact that it's a little thinner Huawei took a very thinly-veiled swipe at Cupertino with the strapline "much bigger than bigger, yet pocketable".

Indeed, Huawei claims that its 6.8in monstrosity is pocketable. Not, we would contend, unless your pockets somehow employ dimension-shifting wizard magic. The P8 Max is a beast of a phone, dwarfing even the Lumia 640XL.

It's so big, in fact, that we're drawing a line here. The Huawei P8 Max isn't a phone. It isn't even a phablet. With a screen that's barely smaller than the Nexus 7's, Huawei's monster phone is just a tablet that can take calls. A very interesting tablet with many great features, but a tablet nonetheless.