Samsung Galaxy Note 5: Everything you need to know

Samsung Note 5 features curved back, flat screen and will not launch in the UK 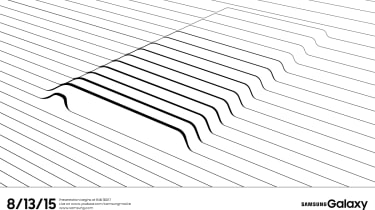 Fans of larger phones rejoice: the Samsung Galaxy Note 5 is (sort of) here.

Hailed by many as the king of the phablets, the Note 4 has been an extremely popular choice for those who favour a plus-sized screen, but it may soon be surpassed by Samsung's newest effort.

09/10/2015: Despite the non-availability of the Samsung Galaxy Note 5 in this country, Andrew Williams has managed to get his hands on a unit and reviewedit for this publication.

As early leaks suggested, the metal and glass body is curved at the back rather than the front, with a push-to-release S-Pen built in. Also introduced is improved Air Command functionality, along with a cover that features a removable physical keyboard.

The Note 5 also comes with fast wireless charging support built in, along with improved image stabilisation. To the chagrin of many enthusiasts, it's got rid of the expandable memory and removable battery that were oft-lauded features.

However, if this sounds good to you, prepare to be let down - as sister site Expert Reviews points out, it's looking like the Galaxy Note 5 won't be coming to the UK. If you're desperately after one, UK customers might be forced to seek imports from other countries.

13/08/2015: A new GIF has been sent out by Samsung which appears to confirm many previous rumours.

The GIF shows the outline of the forthcoming device, due to be unveiled later today. Notable, however, it's the way the flow of the lines appears to indicate a curved edge on either side.

Also visible is a protrusion on the bottom left corner of the device, which is almost certainly the Galaxy S-Pen emerging from its housing.

Fresh photos from French leakers nowhereelse.fr, which claim to be of a Note 5 dummy model for retail display, would seem to corroborate this, but with an interesting addendum. 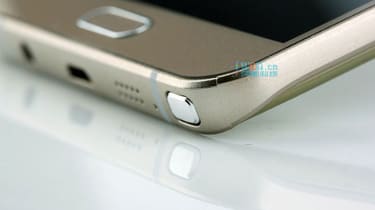 The pictures show the location of the S-Pen slot as located on the bottom right of the device, rather than the left. When cross-examined with Samsung's GIF, it heavily implies that the twin curved edges are in fact on the back of the device, and not the front - something that Nowhere Else's photos also show.

This is liable to disappoint some fans, who were hoping for the Note 5 to follow in the footsteps of the Note 4 and the Galaxy S6 Edge. Instead, all indications point to an ergonomically-curved back for easier hand-holding.

As expected, the invites that went out for a Samsung press event in New York on 13 August at 11am EST (3pm GMT) turned out to be the unveiling of the new Galaxy Note 5, as well as thenew Galaxy S6 Edge Plus.

Unfortunately, as sister site Expert Reviews points out, it doesn't appear that the Galaxy Note 5 will be getting a UK release in the near future. This doesn't mean that it's permanently off the table, of course, and serious fans will be able to get their hands on imports easily enough, but you're certainly unlikely to pick one up on day one of release.

In fact, Amazon is offering UK buyers the chance to get their hands on the phablet. There's a 32GB version available on the site for 479.

No pricing information for the Galaxy Note 5 has been confirmed, or even particularly strongly rumoured. However, we can use the launch prices of Samsung's previous phones to form a fairly educated guess.

Both the Galaxy S6 and the Galaxy Note 4 launched at around 600, so expect the latest release to hover somewhere around that margin. On the other hand, we could see a price hike to around the 650 or 700 mark. OF course, that's only if the Note 5 actually gets a UK release - and that's currently a pretty big 'if'.

As expected, the Galaxy Note 5 has already been the subject of various leaks, including alleged photos, renders and specifications.

Various rumours and leaks have indicated that the processor at the Note 5's heart is an Exynos 7420 SoC. This is the same CPU that powers the company's latest S6 flagships, following Samsung's leap from Qualcomm's Snapdragon chips to its own in-house models. 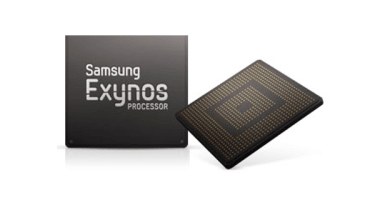 For those not already familiar with the S6's CPU, that means an octo-core processor, with 4 ARM Cortex A57 cores and 4 Cortex A53s running at 2.1GHz and 1.5GHz respectively. This has led to some incredibly quick performance from the S6 and bodes well for the Note 5.

Elsewhere, it's outfitted with a Mali-T760 GPU and 4GB of LPDDR4 RAM, which should provide similar levels of power to the S6. The Note 5 will also support the current fastest 4G speeds out of the box, and even the forthcoming LTE CAT 9 standard.

As Samsung's premier large-screen phone, resolution has always been a key point for the Note range. The Note 4's QuadHD resolution was eye-searingly gorgeous and is set to make a return for the new Note 5's 5.7-inch display.

We're a little disheartened that the resolution hasn't been bumped up a little, and the Note 5 isn't as far ahead of the curve as its predecessor in this respect. Still, it's more than sufficient, and it's still comfortably up there with the best mobile screens around.

The principal feature of the Galaxy Note series as suggested by the name is the inbuilt stylus and note-taking functionality. The S-Pen stylus will be making a full return, and comes integrated into the main body via a spring-loaded slot.

Various complementary features will also be back, such as Action Memo, Smart Select and Screen Write, all of which should make exemplary use of both the abundant screen real estate and the stylus.

Samsung is now boasting that the S-Pen can jot down notes even when the phone's screen is locked. We're a touch concerned about how much battery this feature will use, but it's likely to come in handy for anyone with an overly long or complicated lock screen password.

One new feature is the addition of a customisable shortcut to the S-Pen's Air Command menu, which will allow users to add a quick shortcut for various apps or actions.

Although the major talking point of the Galaxy S6 launch was its curved-screen variant, the Note Edge did it first. However, leaked photos obtained by Droid Lifeshow that the device has a flat, rather than curved, screen. 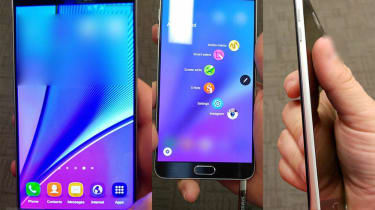 It does include an S6 Edge-style curved back for more ergonomic grip, but given that the NoteEdge was the pioneer of Samsung's curved displays, it's a shame to see them abandoned for its successor.

In worrying news for fans of after-market modifications, the Note 5 features no MicroSD slot for expanding the device's memory and a non-removable battery.

This has always been a key feature for many of Samsung's core fans, so its removal from the Note range as well as the flagship models may prompt some customers to look elsewhere.

One particularly interesting development is a case launched alongside the Note 5, which features a physical keyboard. The keyboard case allows users to fit a QWERTY keypad across the bottom of the screen for easier typing, and then flip it back for full touchscreen use.It's a neat idea, and should be seriously worrying BlackBerry.

The Note 5 is taking quite a few of its design cues from the Galaxy S6, it would appear. The back is now glass, as opposed to the soft-touch plastic of the Note 4, and the edges are bound by brushed aluminium with razor-thin bezels.

Overall, it looks incredibly sleek and polished, with attractive lines and a slim profile. It's not quite as visually appealing as the gorgeous Galaxy S6, but it looks pretty close, and it certainly wouldn't look out of place among an enterprise tech portfolio.