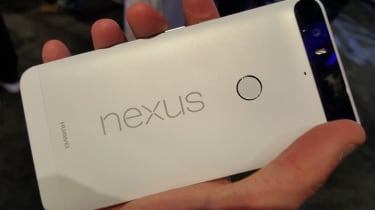 The Nexus 6P is the latest iteration of Google's own-brand Android handsets, manufactured by Huawei and launched alongside the Nexus 5X. It's also Google's most high-end handset yet, and should get Anroid fans very excited indeed to lay their hands on it.

The Nexus 6P features a metal unibody made of aeronautical grade anodised aluminium. It looks really rather swish, and it's definitely the most premium Nexus device we've seen. The slightly protruding camera and sensor housing across the top ruins the phone's lines slightly, but otherwise, it's sleek, machined, and mighty attractive.

Weighing in at 178g and 7.3mm, the Nexus 6P is a decent weight and thickness. It may not be the most svelte, but it's perfectly adequate, and definitely not going to weigh anyone down.

The Nexus 6P, as well as its smaller sibling, the Nexus 5X, will be available in the UK from late October through the Google Store as well as network partners.

When the Nexus 6P launches, it will retail at 499 for the 32GB version. This is a pretty phenomenal price, particularly given its premium specs. Considering it's aiming to go toe-to-toe with the likes of the Samsung Galaxy S6 Edge, a mid-range price like this could go a very long way indeed to putting it at the top of the charts.

The 5.7in, 2560x1440 QHD AMOLED screen isn't quite as impressive as displays on recent flagships like the Samsung Galaxy S6 Edge Plus, and brightness initially appears to be a little lacklustre. However, it's still not bad, and it proves that Google's own-brand line is still capable of keeping up with the big boys.

The Nexus 6P also contains a Snapdragon 810 CPU. This Qualcomm chip gained quite a bit of notoriety for its overheating issues, which was reportedly part of the reason that Samsung ditched it in favour of an in-house chip for its latest round of flagships.

However, with all that negative attention in mind, we'd be a little surprised if Qualcomm hadn't rectified the problem. If it does still have issues with overheating, this could prove to be a critical flaw for the 6P.

These problems aside, the 810 remains a good processor, and would give the 6P more than enough oomph especially when paired with an ample 3GB of RAM, which is exactly what we'd expect to see from a big-hitting flagship. This should provide plenty of power to get the job done, while not being an unnecessary drain on battery life.

The Nexus 6P offers 32GB, 64GB and 128GB storage options the biggest upper limit ever seen on a Nexus device. With a lack of expandable memory, offering an unprecedented amount of memory is a smart choice for Google. They've also jettisoned the paltry 16GB tier, as befits a more premium device.

The 3450 mAh battery featured on the new phone seems plenty meaty enough to carry the phone through at least a day of heavy use, particularly with the new battery-saving features introduced by the new Android Marshmallow update. However, that screen is a bit of a monster, and with large, high-res screens being a frequent Achilles heel for phablet battery life, we're not getting our hopes up just yet.

The Nexus range now includes fingerprint sensors, which Google has dubbed Nexus Imprint. This is the big new feature for the next set of Nexus phones, with Google integrating it into its Android Pay service, as well as into device and app security.

Google claims that Nexus Imprint recognises prints in under 600ms, and supposedly even improves its accuracy with use. The sensors will also wake and unlock the device immediately with a single touch.

While we weren't initially sure about the sensor's positioning on the back of the device, in practice, it's perfectly easy and comfortable to use, with a bare minimum of stretching required. Not only that, but the accuracy is as good as Google claims 10 times out of 10, it recognised our fingerprint, woke up and unlocked in under a second.

The standard MicroUSB connection seen on most Android phones has been replaced in the new Nexus line with USB Type C. Not only is the connector reversible, it also offers fast charging, which is a fantastic feature, and one that's yet to see real wide-spread adoption. If it can reliably deliver on its claimed charge times, the Nexus 6P could be a winner on that alone.

Google is following prevailing market trends, and making a big deal out of the Nexus 6P's camera. Alongside improved low-light photography, the camera software now features 30fps burst shots and slow-motion video, paired with improvements in Google's Photos app for easier archiving and sharing. The improvements seem to have paid off, and while it's no iPhone 6, the 6P's snapper isn't half bad.

The Nexus P6 is a pretty sterling phone. Despite the fact that it's packing mildly impressive specs, it manages to maintain a price that still just about qualifies as mid-range, and crams in a host of new features that showcase Android Marshmallow at its best. Once again, the Nexus range provides one of the best Android smartphones around.