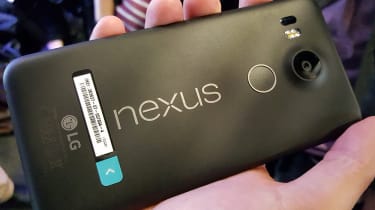 The Nexus 5X is the latest iteration of Google's flagship Android brand, debuting alongside the larger and more premium Nexus 6P. Manufactured by LG, the phone is a great example of why Google is still regarded as one of the biggest players in the budget and mid-range sectors.

The Nexus 5X is housed in a rounded matte plastic shell, with a bulge on the back that houses the camera. In initial leaks, the camera housing appeared unsightly and zit-like, but in the flesh, it's actually much smaller, and very unobtrusive. Below that, there's an inbuilt fingerprint reader but more on that below.

Something we weren't expecting is how pleasant the device feels in the hand. The plastic used for the body's construction is very, very nice, and the 5X felt instantly comfortable in our hands. It also feels pleasantly sturdy, with very little creak in the body.

It's got a 136g weight, with a 7.9mm thickness, and while these aren't top-flight dimensions, they're far from embarrassing, and present absolutely no problems in practice.

The Nexus 5X will retail for 339, and is set to go on sale in Late October. This low price is likely to be Google's ace in the hole with the 5X, as the hardware specs are certainly nothing to get excited about. However, an entry price this affordable could see Google beating back its Asian competitors to reclaim its place as king of the mid-range phones.

A 1.8GHz Snapdragon 808 hexacore processor provides the beating heart of the Nexus 5X. The same CPU that powers LG's marvellous G4, the Snapdragon 808 is a perfectly capable processor that we're gratified to see crop up in such a budget device.

The Nexus 5X is also fitted with 2GB RAM. Although not hugely surprising given the price point, this is definitely less RAM than we're used to seeing in flagships. However, we've seen handsets do a lot with less memory than this, so it's not an automatic write-off just yet. Still, we noticed ever-so-slight hints of slowdown indicating the 5X could struggle if it's put under undue strain, so don't expect any miracles.

While we were hoping to see the inclusion of wireless charging with the newest batch of Nexuses, fast-charging via reversible USB Type C is the next best thing. Eliminating both a huge chunk of overall charging time and the hassle of figuring out which way up the cable goes, this time-saver is a feature we're expecting to spread across all handsets in the very near future. 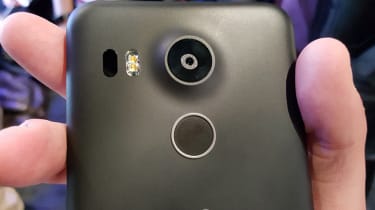 The Nexus 5X's 5.2in, Full-HD, 1920x1080 IPS display is admittedly far from bleeding edge, but it's absolutely fine for everyday use in fact, it boasts a more than respectable pixel density of 423ppi. We found that, while brightness was a little on the underwhelming side, we found that it was perfectly clear both for reading fine-print text and for watching high-resolution video.

Another positive element of a lower-resolution screen is that it should help boost battery life too, as the CPU doesn't have quite as many pixels to shunt around the screen.

This may come in handy, as the 5X's 2700mAh battery seems downright small by today's standards and could prove a problem for power users that find themselves frequently charger-hunting. However, battery life may well be aided by the device's low-power internals and the much-touted power management innovations coming with Android M.

The new Nexus 5X comes in 16GB and 32GB flavours, and with no mention of additional storage, this may worry some users. It's a barely capable amount of storage, and it is decidedly not superb - let's hope Google bundles some free Google Drive storage with it.

Big emphasis is being placed on the 12.3MP rear snapper, particularly with regards to its low-light image quality. The camera boasts two-tone flash, as well as laser assisted auto-focus and 4K video at 30fps. Photos with the 5X are impressively crisp for a budget phone, and are set to work well with new software features such as burst-shot mode and 30fps slow-mo.

The previous Nexus 5 sat at the top of many 'Best Smartphone' lists for some considerable time after its release, and there's a very good reason for that. Google is excellent at creating mid-range phones with sterling feature-sets and quality, and the Nexus 5X is a perfect example. A very tempting price coupled with great features and internals make this Android flagship a definite one to watch.