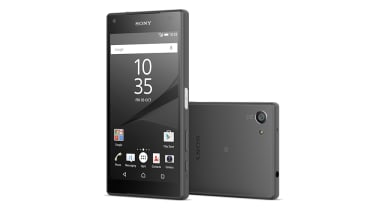 The Sony Xperia Z5 Compact is the follow up to theXperia Z3 Compact, one of our favourite phones of last year, and our favourite small form-factor phone. With most other phone manufacturers ignoring their mini phones in favour of new 5in phones and phablets Sony should have the market to itself with the Z5 Compact.

For a reminder on why we love the Xperia Z3 Compact so much, check out Alphr's review.

The first thing that immediately stands out is that the Xperia Z5 Compact has superb build quality. The back is smooth-touch frosted glass, and the edges are attractively finished in rounded matte plastic with the Xperia logo embossed on the side.

It's available in yellow and coral, as well as the more sedate black and white variants. It feels pleasing and secure in the hand, and is generally the sleekest and most professional-looking compact phone we've seen in ages.

The relatively small 4.6in screen means the Z5 Compact is one of the most comfortable Android phones for one-handed use with single-handed functions like tweeting, texting and web browsing all smooth and painless. We never found ourselves stretching to reach the furthest edges of the screen, which can sometimes be a problem on larger devices.

This isn't hugely surprising the sensible size was one of our favourite things about the earlier Z3 Compact, and the newer version is almost identical in that regard. The Z5 Compact is, however, a little heavier and a few millimetres thicker than the Z3 Compact, which gives it a decidedly chunkier feel when compared side-by-side.

It's hardly unwieldy, but it's disappointing that Sony's new compact hasn't at least equalled the dimensions of its predecessor given the razor-thin and feather-light flagships currently doing the rounds.

The only other quibble we have is that the volume rocker has changed position. Rather than being located directly under the power button, it's now just above the camera trigger. This is an incredibly awkward placement, and requires much annoying thumb-stretching, whereas the Z3's volume rocker was near-perfectly placed.

The trade-off for having a sensibly-sized 4.6in screen is that it is, of course, less spacious that a far bigger, higher resolution phablet screen. While this means it's not quite as well suited to some tasks, such as working on huge multipage documents or watching boxsets worth of video, it's still more than good enough for everything else and is a good display in its own right too.

The Z5 Compact's 4.6in IPS screen is reasonably bright with good colour accuracy. A 1280x720 pixel resolution in a 4.6in screen means the Z5 Compact maintains a high pixel density of 319ppi. That means text is still very sharp.

It's not a total write-off the issues aren't pronounced enough to be concerning or dangerous, and we've definitely seen phones that run hotter. However, the fact is that the Z5 Compact gets noticeably and almost uncomfortably hot at times. These problems occur seemingly at random, happening both during intense workloads and also when performing lighter tasks.

The Snapdragon 810 is paired with 2GB RAM, which is a little disappointing. Unchanged from its previous iteration, the Z5 Compact's RAM is now lagging behindcutting edgesmartphones with 3GB and 4GB memory allocations. Considering that the Z3 Compact matched its flagship competitors in this area, it's a slight shame that Sony hasn't done so again here.

Despite this, its benchmark scores were respectable. Its HTML rendering capabilities were good and swiping through menus and apps was smooth and responsive. While we did occasionally notice a little sluggishness, the Z5 Compact remains acceptably quick even when hopping between high-intensity apps.

The Z5 Compact's fingerprint sensor works well. Sony has combined it with the power button on the right-hand side of the phone. The placement means that it's always within easy, natural reach. Even if you're left-handed, the ability to register multiple fingerprints means that you can unlock it with the fingers of your left hand as well as the thumb of your right.

We found that the fingerprint sensor unlocked the phone quickly and reliably, only failing to recognise our prints if our hands were particularly wrinkly from bathing. 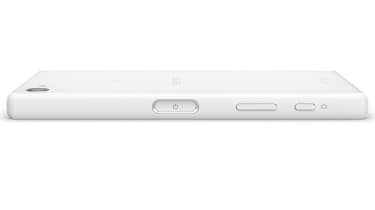 As with most Android fingerprint sensors, its utility is essentially limited to device security and a handful of payment options for now, although increased functionality should arrive with theAndroid Marshmallowupdate.

In previous generations, one of the main benefits of the Xperia Z range was its full IP68 rating, certifying the devices for immersion in 1.5 meters of water for 30 minutes. Marketing materials for devices like the Xperia Z3 were full of images of the phone in a fishbowl while remaining perfectly operational.

Unfortunately, as members ofIT Procan testify, these claims proved to be less than 100 per cent accurate. We've personally witnessed two Xperia Z3 Compacts irreparably damaged by submersion when they should have been well within acceptable limits.

Despite having the same IP rating as the Z3, Sony has now drastically scaled back its claims for the Z5 Compact. It instead only says that the Z5 Compact is "built to withstand the splashes that are a part of everyday life".

Given that it's still technically rated for full submersion, we're pretty confident that accidentally dropping the Z5 Compact in the toilet won't destroy it, but we're no longer quite so sure about taking it in to the pool which makes one of the Xperia Z range's most attractive features far less useful.

Sony provides the sensors and lenses for many competing smartphone cameras, and has brought all its expertise to bear on the Z5 range. In short, it's one of the very best smartphone cameras on the market, second only to the iPhone 6s Plus and Samsung Galaxy S6 Edge Plus.

Autofocus is fast and accurate and, thanks to the 23 megapixel sensor, photos have fantastic detail and clarity. Colour accuracy is spot on and snaps are vibrant even in low-light conditions.

The Xperia Z3 Compact had an absolutely stonking battery life, which is partly why it was one of our favourite phones of last year. The new Z5 Compact, however, is a little less impressive than its predecessor.

While we could confidently get around a day and a half of moderate use out of the Z3 Compact, this phone will only manage just over a day. With heavy use, that'll shrink to around 8 to 10 hours. That's hardly embarrassing, and it's a lot better than many of its competitors, but it's another area where the Z5 still hasn't bested the older model.

However, the sting is taken out of this significantly by the inclusion of fast charging. The Z5 Compact also still includes Sony's excellent Stamina Mode, which subtly lowers power consumption by throttling app activity when you're not using the phone. This reliably extends the battery life by a good few hours.

If you're really hurting for charge, Ultra Stamina Mode disables everything but a selection of core functions, and drastically scales back screen performance and brightness in order to make your remaining battery charge last as long as possible.

The Xperia Z5 Compact comes with Android Lollipop 5.1.1 pre-installed. It should be set for an Android Marshmallow upgrade before too long, although no specific dates have been released.

Sony's own skin has been applied over the top of the software, but theuser interface has been slightly redesigned from previous versions, and now has a little more in common with Google's Material Design.

As is common with Sony phones, it's packed with quite a few pre-loaded apps, only some of which are any use. Social media tools such as Twitter and Vine will no doubt be convenient for many, but the numerous others (at least three of which are barely-disguised marketing for Sony's other products and services) are less welcome.

Although it's a little odd that a 2015 mini smartphone is as big as the phablets of five years ago, the Z5 Compact is still a good small form factor phone. Sony deserves credit for the top quality camera, accurate fingerprint reader and fast charging.

It's therefore a sham that the Z5 Compact isn't quite as fast as other phones, plus there are the overheating problems and the regression in waterproofing. It feels as if Sony has taken two steps forward and one step back.

The Sony Xperia Z5 Compact is good, but when you can pick up the Z3 Compact for almost 100 less, it's not quite good enough.

Although the camera and fingerprint sensor are fantastic improvements to the earlier Z3 Compact, the new Xperia Z5 Compact just isn't enough of a leap forward to justify the high-end price tag.