A solid mid-range handset that has nothing to shout about, but equally has no complaints. 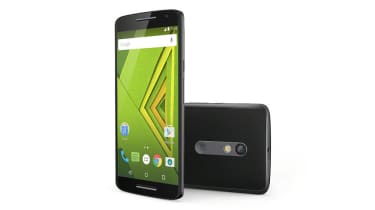 Mid-range smartphones like the Moto X Play are becoming more and more sophisticated. While the middle ground of devices used to be a wasteland with very few affordable, quality handsets, recent years have seen cheaper phones equalling, or in some cases beating, their more expensive counterparts. The Moto X Play is a great example of why.

Like Motorola's now discontinued Nexus 6, the Moto X Play is a big phablet but with a 5.5in screen instead of 6in. It's very much a two-hand operated device, but it does sits very comfortably in the hand despite its size. This is due to its gently curved body and textured plastic back. It not only makes for a secure grip, but feels pleasantly tactile too. The Moto X Play's materials are high-quality with the phone's metal frame ensuring that there's little flexing or creaking.

The Moto X Play is an attractive phone and you can customise its looks, to an extent, using Motorola's Moto Maker web app. The front of the device can be either black or white, and the plastic backplate and metallic accents are available in a range of vibrant colours. You can opt for an engraving too, if you wish. Bear in mind though that only the plastic backplate can be switched out whenever you want the other customisable elements can't be changed after you've chosen them. It's a shame that the wood and leather material options available for the pricier Moto X Style aren't also available for the Play though.

Although it's hardly unique to modern smartphones, The phone's casing is also dust and water resistant. Although several other Android phones also have this feature, it's still welcome whether you're clumsy or work outdoors frequently.

The Moto X Play has  a 5.5in 1920x1080 screen, which is fast becoming the standard for mid-range handsets. In practise, the display is perfectly good, if not spectacular. Text is sharp, but colours have a tendency to seem a tad muted and the brightness isn't the best we've seen. You're unlikely to notice these flaws in everyday use though - it's more than serviceable for watching videos and so on. 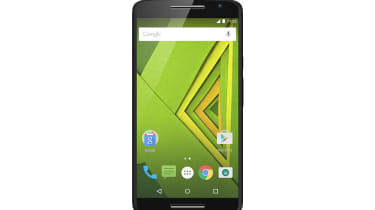 Part of the reason for the Moto X Play's relatively low price is that Motorola has fitted it out with older, cheaper components. It's powered by an octa-core Snapdragon 615, Qualcomm's first eight-core processor from 2014 with four 1.7GHz cores and four 1GHz cores.

It's now primarily found in budget handsets made for developing countries, so it's unsurprising that its benchmark scores lagged well behind the top tier of devices. It's not ideal for intensive workloads.

Having said that, it is good enough for everday use. The Moto X Play's HTML and Javascript rendering speeds are good, so web browsing and most apps run well. We never experienced enough slowdown to have to close apps running in the background.

Motorola claims the Moto X Play's 3630mAh battery will last two days, but this will very much depend on your usage. It lasted around 12 to 14 hours when used for web browsing as well as frequent music and video streaming. 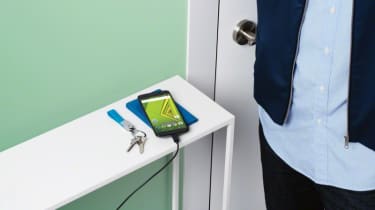 It fared well in our benchmarks, lasting 12 hours and 43 minutes when playing H.264 video on a loop and just under ten and a half hours in our simultaneous web browsing and MP3 playback test.

The phone has support for TurboPower charging, which according to Motorola can provide up to 8 hours of charge in just 15 minutes. It's a bold claim, but one that we were sadly unable to test as Motorola haven't been able to supply the necessary TurboPower adapters. These are not included in the box, retailing separately for around 25 instead. We suspect TurboPower is just a rebranded version of Qualcomm's QuickCharge 2.0 technology as the Moto X Play will allegedly charge quickly with any QuickCharge 2.0-compatible charger.

For a mid-range phone, the Moto X Play has a surprisingly good camera. The colour reproduction isn't quite as good as it is on more expensive phones and some of the finer detail can get lost in pictures, but it still does well in most situations.

Of course, there are problems. Low-light photography in particular is very disappointing, with lots of noise marring most pictures. The flash has a tendency to wash out colours.

Motorola's custom camera app has been designed to be as simple as possible. Tap the screen to take a picture, hold for multiple burst shots and scroll up to zoom. More in-depth controls can be found in a dial menu at the side of the camera screen, although you still won't find the fine-grained functionality found in other smartphone camera apps.

Overall, amateur snappers are likely to be perfectly pleased with the Moto X Play's camera, but anyone that knows their way around more advanced features such as ISO numbers and white balance will be underwhelmed by the available controls.

The Moto X Play ships with Android 5.1.1 pre-installed and is one of relatively few phones with an uncluttered Android interface that's close to how Google intended it. Motorola hasn't messed around with the user interface or menu systems with the exception of some pre-installed apps and utilities which can easily be ignored if you don't find them useful.

Available for under 300 SIM-free, the Moto X Play is a great deal. It's not the most impressive phone on the market, but what it lacks in pizzazz, it makes up for in well-rounded value. The only other Android phones worth considering at this price are the OnePlus 2 and the Honor 7. The OnePlus 2 has similar customisation options, but has an annoying purchasing system. The Honor 7 isn't as stylish and its camera isn't as good, but it is similarly water resistant and has a fingerprint reader too. It's currently only available on Three though and has a very messy, cluttered Huawei-designed interface.

The Moto X Play is all about no-frills functionality. At under £300, it's a great value smartphone.