HTC One A9 release date, price, specs and features 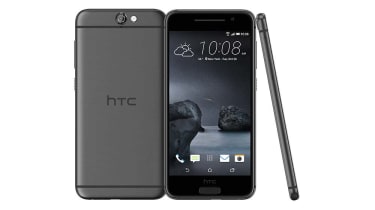 HTC has taken the wraps off its latest phone the HTC One A9. Comfortably occupying the mid-range of devices, the A9 looks like a worthy challenger to Google's new Nexus phones.

The HTC One A9 looks strikingly similar to Apple's iPhone 6, particularly thanks to the rounded edges. It's also lost HTC's signature convex curved back, and has instead gone for a flat, 7.26mm thick shell.

As with all of HTC's major releases for the past few years, the A9 has a metal unibody a design flourish that has now been widely aped.

However, it's switched from the distinctive brushed-aluminium of the HTC One M9 to a matte finish, deepening the comparison with Apple's device.

The Gorilla Glass 4 screen is also very slightly rounded at the edges - not in the same way that the Samsung Galaxy S6 Edge is, but just enough to blend the screen nicely with the body.

The screen itself is a 5in, 1080p AMOLED panel. The pleasingly small bezels should cut down on the phone's weight and form-factor, while the AMOLED display ensures that colours will be nice and vivid.

The HTC One A9 is fitted with an octocore Snapdragon 617 CPU, with four cores running at 1.5 GHz and four clocked to 1.2 GHz. That's twinned with 2GB of RAM and 16GB of storage space, but some territories (including the UK) will also be receiving a variant with 3GB of RAM and a 32GB hard drive.

The battery is a little disappointing the 2150mAh cell may prove underpowered, especially compared to rivals boasting batteries of 3000mAh and above.

The HTC One A9 will ship with Android Marshmallow preinstalled one of the first phones to do so outside of Google's own Nexus range. On top of that, HTC has promised that it will also get every Android update within 15 days of its rollout to Nexus phones.

As with its flagships, HTC has overlaid the A9 with its own custom interface, the Sense UI. HTC's Android skin isn't as cluttered as some other offenders we've seen though, and some of the widgets are pretty useful.

The A9 supports Quallcomm's Quick Charge 3.0, which claims to be twice as fast as the original version. It's also got a pretty nifty camera, with hyperlapse video recording, a 13MP sensor and the ability to capture and edit RAW files.

Best of all, it's also got a MicroSD card slot for expandable storage, meaning you can beef up that slightly paltry 16GB allowance.

The HTC One A9 is set to retail in the UK for 358.33 excluding VAT that's for the 16GB version with 2GB of RAM. Pricing for the more powerful version is still unknown, as is its release date. We do know, however, that it will be available through Vodafone, O2 and Giffgaff in the UK, with more carriers likely to follow.