A Windows 10 phone and PC in one device! Well, sort of. 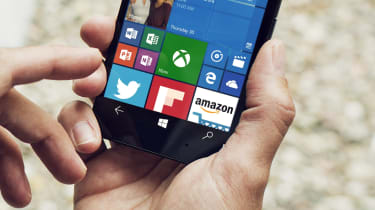 Microsoft is the undisputed master of desktop software with the dominance of Windows unquestioned. The relative failure of Windows Phone must therefore be an uncomfortable and unfamiliar experience for Redmond, but failure can breed innovation.

The Lumia 950 is one of the first Windows phones completely designed under the new Microsoft Mobile name rather than the now discarded Nokia branding. It's also the first phone we've seen to run Windows 10 Mobile, the new and somewhat confusingly named successor to Windows Phone 8. This combination of new hardware and software is a mix of the beguilingly innovative and the frustratingly half-baked. 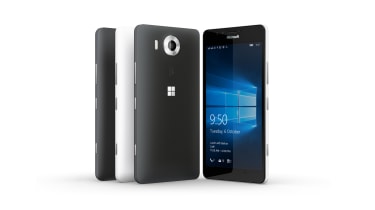 Windows 10 Mobile doesn't appear that different from its predecessors at first glance with the same Live Tile-dominated home screen as before. There have been numerous changes to the interface though, most noticeably the toning down of the distinctive typography.

The previously large words doubling as titles and buttons are now much smaller, while the horizontal-scrolling toolbars have now largely been replaced with the hamburger menus familiar to Android and iOS users. Many of the eye-catching animations have been toned down too. 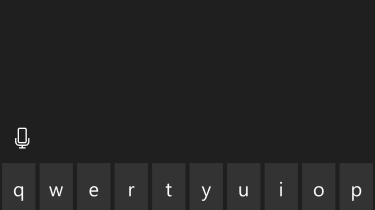 Microsoft's keyboard now has a virtual mini-joystick for quickly and precisely moving the cursor through words in sentences, but it was fitful and fiddly in our experience

The new, smaller and more mundane typography makes better use of the available screen space, but we can't but help feel bereaved Windows on a phone now looks far less distinctive than it did before.

There are plenty of other welcome changes, albeit mostly minor. The Edge web browser replaces the old Internet Explorer and is more standards compliant. You can also change its default search engine from Bing to Google, although the dedicated Search soft key present at the bottom of the screen throughout the Windows 10 Mobile interface is still tied to Cortana and Bing. The swipe-down notifications and quick access settings drawer now greatly resembles the one in Windows 10 on the desktop with actionable notifications. 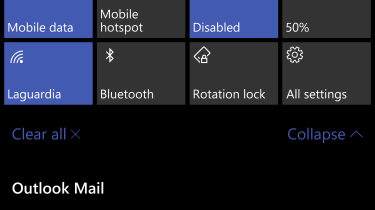 The Here-based Maps app now has more up-to-date maps with business and location data that's more accurate. It also has the excellent public transport directions feature previously found in the separate Here Transit app. However, we found that it's still not as accurate as Google Maps especially the further away we got from central London. The panning and zooming can also be surprisingly laggy and imprecise. 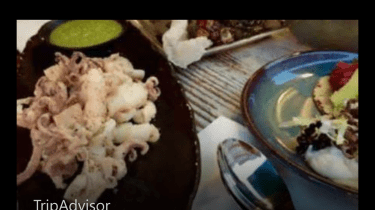 The Outlook email app now has gesture-based actions and shortcuts, such as swiping in from the right on a message to delete it. Settings can now be searched by keyword, while the SMS Messages app can now integrate with Skype. 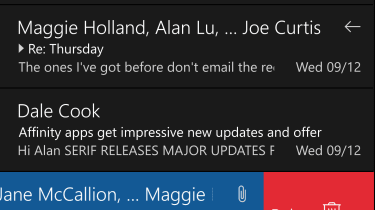 The previous catch-all Office app has been split into separate Word, Excel and PowerPoint apps which more closely resembled their iOS and Android counterparts. They're obviously far more basic than their desktop or even their tablet counterparts, but are still surprisingly capable Word, for example, supports basic styles and change tracking.

Update 20/1/2016 - Windows Hello uses the front-facing webcam to recognise your eyes and thus unlock the phone, taking the place of a passcode. It's a feature unique to Windows 10 Mobile and thus currently only available on the Lumia 950 and its bigger cousin, the 950 XL. We've covered the mobile version of Windows Hello in more depth in our 950XL review.

The single biggest new feature in Windows 10, and one that only works on certain phones including the Lumia 950, is Continuum. Connect the 950 to a keyboard, mouse and display and you can use it as an almost fully-fledged PC. It's a remarkably futuristic-seeming technology that worked surprisingly well in our experience. However, there are a lot of caveats.

First of all, you'll need a way of connecting the 950 to your display either wirelessly or via an adapter plugged into the phone's USB-C port. Microsoft wasn't able to supply its own HDMI and DisplayPort-equipped Display Dock, so we instead used a third-party adapter (as you might do yourself when caught short in the field) in this case Apple's USB-C VGA Multiport Adapter. This adapter has a USB-C port for power, a VGA socket and a full-size USB2 port. 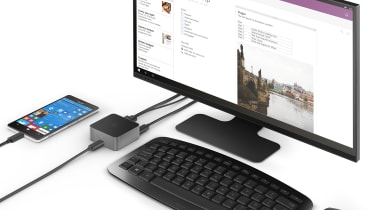 After plugging everything in, a Windows 10-style desktop appeared on our 22in 1080p monitor which we controlled using a Bluetooth keyboard and mouse. Impressively we were able to continue using the phone, such as checking Facebook, answering calls or triaging email, while browsing the web or working in the Office apps on the external monitor. If you don't have a USB or Bluetooth mouse to hand, you can use the phone's screen as a touchpad. This clever trick only works well if the phone is oriented on your desk in portrait mode though.

This is impressive technology, but there are limitations to this external big-screen mode this isn't quite a full-blown Windows 10 PC in your pocket. You can only have a single app onscreen at a time, although the ability to use another app on the phone's screen at the same time is a usable workaround for this. The only apps that you can use on an external screen are what Microsoft calls Universal apps' apps that have been designed to run on full-fat Windows 10 computer, Xbox One as well as Windows 10 Mobile. Such apps are, for the moment, thin on the ground. There's no guarantee that the selection and quality of apps for Windows 10 Mobile, Universal or not, will improve, although we hope it will.

There are performance and responsive limitations worth bearing in mind too. There was sometimes a small but noticeable lag when typing or mousing around using Bluetooth input devices that only fully disappeared when we switched to a USB keyboard and mouse instead. Having lots of complex websites and web apps open in lots of tabs in the Edge browser was enough to cause the entire system to start chugging, although this problem wasn't quite as bad as it is on Atom-powered Windows mini PCs, super cheap laptops and compute sticks.

We also encountered various bugs in using an Apple USB-C video-out adapter with the Lumia 950. USB sticks connected to the 950 via the adapter's USB port weren't recognised as they should've been. Even more aggravatingly, the image on our 1080p monitor appeared stretched and distorted as if it had been set at a particularly low, non-native resolution. While there's no way of fixing this, the big-monitor experience was still capable enough that we were still able to write this review in Word on the Lumia 950.

Update 20/01/2016 - We've finally gotten our hands on Microsoft's official Display Dock and it works much better then unofficial third party Continuum docks as revealed in our Lumia 950XL review.

It's possible to use a Miracast-compatible wireless display, TV or adapter instead of a wired USB-C adapter, but the resulting lag made even simple computing a frustrating experience.

Given the distinctive and sturdy curved coloured plastic cases of previous Lumias, the very plain black plastic casing of the Lumia 950 is disappointingly bland and cheap feeling too. It looks a bit like a cheap Nexus 5X knock-off. The Lumia 950 does have a couple of features that its Android lookalike does not there's a micro SD slot underneath its easily replaceable battery. 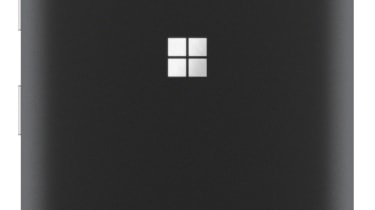 You'll also be able to replace the removable back panel with a differently coloured one, but you'll have to rely on third-party panels as Microsoft doesn't currently have any plans to make and sell them.

As expected for a phone at this price, the screen looks good. Measuring 5.2in diagonally, it has a high resolution of 2560x1440 pixels so text looks sharp. It's very bright with good colour accuracy and contrast. 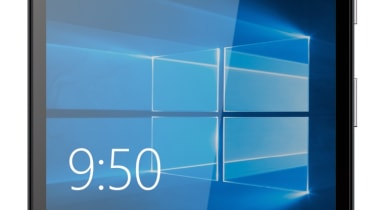 The 950 has a six core Snapdragon 808 processor and 3GB of memory so it performed well in almost all of our benchmarks. The only exception was in 3D graphics where it fell behind other similarly specified phones, although that's not a crippling flaw given the paucity of apps that use detailed 3D graphics on Windows phones. We only saw minor lag in the responsiveness of the touchscreen and the user interface certainly nothing approaching the serious judderiness reported by some early adopters.

Battery life wasn't exemplary, merely satisfactory. It lasted just over ten hours when playing H264 video on a loop. When connected to the EE network and used in and around central London for calls, photography, GPS and web browsing, the battery lasted just under 24 hours. 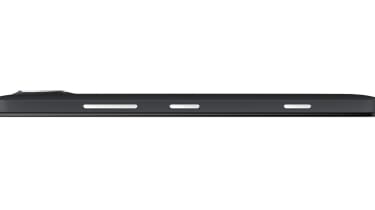 Microsoft's camera app tries to appeal to both amateur and experienced photographers, but with mixed results. For the latter, there's control over the white balance, ISO, shutter speed and bracketing. For more easily flummoxed snappers, the camera app has the optional Rich Capture mode which uses a combination of HDR, bracketing and post processing in an attempt to get the best possible shot no matter the shooting conditions. 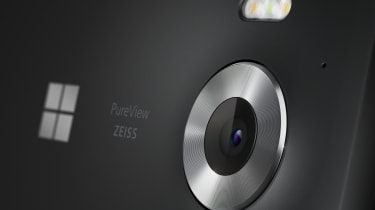 In practice, Rich Capture often oversharpened photos, especially those taken in low light, leading to hideous looking artefacts. Colours were either oversaturated or skewed with a heavy yellow or green cast. Turning off Rich Capture lead to far better looking, more accurately judged photos but on our review unit Rich Capture had an annoying habit of turning itself back on. Constantly turning it back off, and dealing with the shooting lag it introduced when trying to capture action shots, made photography on the 950 feel more like a struggle and a chore than the pleasure it should be.

The Microsoft Lumia 950 isn't a bad phone, just a very average one. Both the software and hardware have lost much of the aesthetic distinctiveness that helped set Microsoft' previous mobile efforts apart from the competition. Other aspects such as battery life and performance are nothing to shout about, while others, such as the camera, are spoiled by iffy software design. The lack of apps remains the biggest problem for Windows 10 Mobile however, especially as its most remarkable feature is dependent on them. 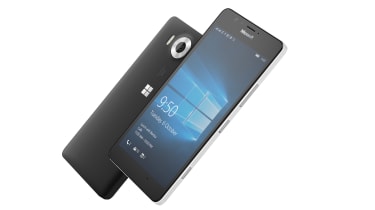 The 950's most distinctive and eye-catching feature by far is Continuum. Based purely on demos of this feature alone, we'd expect a lot of consumers and businesses alike to snap up the 950. While undeniably impressive, various limitations in its current form make it a tantalising hint of the future rather than a practical tool for today. It could be useful for hot desking workers in some offices, but the amount of extra kit required to enable this feature plus its current feature limitations means it's more likely to replace overpriced, overcomplicated thin clients rather than laptops in most workplaces.

Unless Continuum in its current form sets your world alight, there are very few compelling reasons to choose the Lumia 950 and Windows 10 Mobile over the alternatives. Microsoft's latest mobile OS reboot may get better in future, but Redmond has to roll out improvements quickly as it's running out of time as the mobile preferences of consumers and business alike become increasingly entrenched in far more developed and polished mobile ecosystems.

If you're enamoured enough with Windows 10 Mobile to get out your wallet, then the decision comes down to whether you should buy the 950 or its bigger brother the 950XL. The latter is almost exactly identical to the 950, but is heavier and wider. The 950 has a 5.2in screen and weighs 150g versus the 950XL which has a more unwieldy 5.7in screen and weighs 165g. If you can live with its increased dimensions, the 950XL had an extra three hours of battery life in our tests. If you have small hands, go for the 950. Otherwise the extra battery life makes the 950XL.

A good-enough smartphone, but there are better smartphones available unless Continuum is utterly compelling and revolutionary for your business