WhatsApp is adding indicators to show users when end-to-end encryption is being used to secure their conversations.

Screenshots of the beta version of an upcoming release, leaked on the Google Plus page of developer Javier Santos, show the indicators in action. 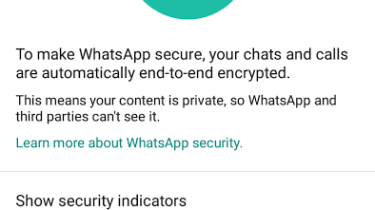 The service already uses end-to-end encryption by default, but will now proactively show users that their messages are being protected.

Additionally, the Investigatory Powers Bill would demand that vendors give the government backdoors into their encrypted services.

But while WhatsApp wants users to know they are not being spied on, it has also included a tool to share users' data with its parent company, Facebook.

It is currently unknown exactly what account information will be shared, but based on the information Facebook mines from its Messenger app, it is likely to be contact lists and phone numbers, rather than chat histories.

The setting is also opt-in rather than opt-out, meaning it is disabled by default.

After scrapping the semi-optional subscription charge earlier this month, this is possibly one of the ways that Facebook plans on monetising its acquisition.