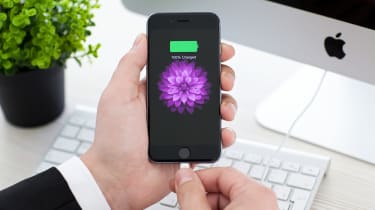 The unnamed up-and-coming device maker will contribute 5.25 million towards the development of a prototype device, according to a Bloomberg report.

Intelligent Energy develops hydrogen-based power systems, and was responsible for projects such as integrating hydrogen cells into London black cabs and Boeing aircraft.

Hydrogen power is principally used as a form of green energy, because the only by-product produced is water vapour. However, it also has substantial applications for commercial batteries.

Aside from some recent signs of progress, innovation around traditional lithium-ion batteries has been largely stagnant for the last 10 years.

Device makers have attempted to offset this with more power-efficient components, but the problem has still led to consumer frustration at increasingly short battery life.

"With consumers demanding more and more from their phones, battery innovation has not kept up," said the company's acting managing director for consumer electronics, Julian Hughes.

"Embedding fuel-cell technology into portable devices provides a solution to the current dilemma of battery life."

However, while the news could have implications on the flagship market, Intelligent Energy's initial devices will be aimed at the developing world, such as areas without existing power infrastructure.

The first models could also take as much as two years to reach the market, the company said, but it has reaffirmed its intentions to deliver the technology to a wider market.

"The killer app is a battery with a seven-day refresh life,"chief executive Henri Winand said. "We think that will appeal to everyone. It's not just for intrepid explorers".

The main challenge will presumably be slimming down the traditionally bulky hydrogen cells enough to fit into the slim form factor that consumers have come to expect from their devices.