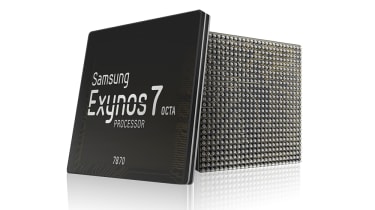 Samsung's flagship processor will be getting a cheaper, mid-range variant, the company has announced.

The firm will use its 14nm FinFET fabrication process to manufacture a new chip, called the Exynos 7870. By using this technique, which Samsung says can give the chip a 30 per cent boost in power efficiency.

Hur stated that this is the first time a 14nm process has been used in this price bracket, and promised that "consumers will experience enhanced mobile performance".

The Exynos 7870 will come with eight cores, clocked at 1.6GHz each, and will support a 300Mbps download speed. The onboard image signal processor can also handle input of up to 16mp from either front or rear camera.

The 14nm process is already used in the creation of the Exynos 7420, seen in the Galaxy S6, and is also used to produce the Exynos 8890 and Qualcomm's Snapdragon 820 - both of which are tipped for possible inclusion in the Galaxy S7.

The chips will go into mass production by the end of March, but don't get too excited about a raft of mid-range phones with beefy Samsung CPUs in them just yet.

Historically, Samsung reserves its Exynos chips for inclusion in its own budget devices, such as the Galaxy A range, or sells them to smaller Chinese and Korean manufacturers.

Many of these phones don't make it out of Asia, or arrive in European markets with Qualcomm parts instead. While they could conceivably wind up in some of the more popular Chinese-made devices, don't expect them to kick-start the next Android revolution.