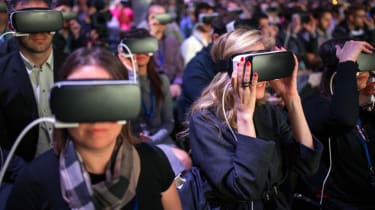 Facebook wants virtual reality (VR) to enhance people's social lives, setting up a dedicated "Social VR" team to look at how the technology can help people connect with one another.

Theinvestment in social VR will allow friends and famiiesliving in different countries across the world to spend time together as if they're in the same room, Facebook hopes, with employees Daniel James and Mike Booth to lead the new team.

Inanofficial blog post, the company said:"This team will explore how people can connect and share using today's VR technology, as well as long-term possibilites as VR evolves into an increasingly important computing platform. They'll will work closely with Oculus and other teams at Facebook to build the foundation for tomorrow's social VR experiences on all platforms.

"In the future, VR will enable even more types of connection like the ability for friends who live in different parts of the world to spend time together and feel like they're really there with each other."

The social network is also improving its360video feature,theblog post confirmed. The'dynamicstreaming'technology used for 360 video will soon be available through Samsung's Gear VR device,which will improve efficiency by only displaying the pixels immediately in front of the user in high quality, rather than the entire video.The new streaming method will reach Gear VR 'in the next few weeks'.

Attendees at Samsung's Unpacked event at MWC 2016 wereoffered a demoof the new 360-degree camera after Facebook CEO Mark Zuckerberg arrived on stage, who went on to talk about the future of VR.

"VR is the next platform where anyone can experienceanything they want," he said. "It's going to change the way we live and work and communicate. Pretty soon we're going to live in a world where everyone has the power to share and experience whole scenes as if you're just there, right there in person."

Facebookunveiled plansto launch a 3D virtual reality app for smartphones back in September and, according to the company, more than 20,000 360 videos have been uploaded so far.

"Our work in VR is still early, and there are a lot of hardware and software challenges that we still need to solve," the blog post continued."But we're encouraged by our progress to date, and we're excited to continue building VR technology that gives people new ways to connect and share."