What's the difference between the import-only Galaxy Note 5 and Samsung's Galaxy S7? 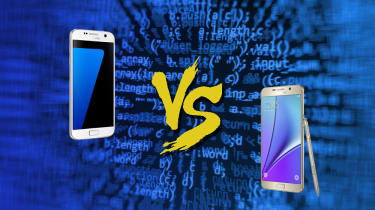 Samsung has launched the Galaxy S7, the latest iteration in its flagship smartphone line. It takes a few design cues from the black sheep of the Galaxy family, the Note 5, so it makes sense to compare the two.

Despite being one of the most anticipated phablets of last year, the Galaxy Note 5 was only officially released in a handful of countries. Die-hard fans can import one from overseas, but the Galaxy S7 is now vying for their affections.

The report comes from SamMobile, which claimed the new device will be the first Samsung handset to ditch the microUSB in favour of the new port, following similar moves from the company's main rivals with their own flagship devices.

Though the rumours are unconfirmed, the reversible USB-C port allows for much faster device charging and the ability to carry HDMI or Display Port video signals, and so it makes sense for manufacturers to begin to switchover.

It has already been stated that the Galaxy Note 6 will be water and dust-resistant, as well as potentially sporting an iris scanner.

After pushing display technology forward for the past few years, Samsung's screens have now apparently plateaued.

The Galaxy Note 4 has a 2560x1440 resolution, as did the Note 5, the S6, and now the S7. They all use Samsung's Super AMOLED technology, and generally have a pixel density of around 500ppi.

Samsung has apparently decided that QHD is the optimum smartphone resolution. Both the Note 5 and S7 have excellent displays with fantastic detail and clarity, although the Note 5 has a slight tendency towards colour over-saturation.

One of the only real differences is the screen size. While the Galaxy S7 is, at 5.1in, slightly pocket-stretching, the 5.7in Note 5 is truly mammoth. This gives it a vast amount of screen real-estate for productivity tasks, but the larger area does result in a slight drop in pixel density while its sheer girth makes one-handed use all but impossible.

The S7 also has an 'always-on' display, which will display widgets such as date, time, notifications and calendar appointments at all times, even while the phone is in sleep mode.

Neither phone has a curved screen, interestingly. Although the 'Edge' moniker and technology was first debuted on the Note range, it's since been adopted by the flagship S7 Edge and vanished from the Note 5 altogether.

While neither the S7 nor the Note 5 has a curved screen, both have curved rear shells. The design first appeared on the Note 5 last year, but has now been adopted by the S7.

The frame is still slim, lightweight aluminium, with a sheet of Gorilla Glass 4 on the front. The S7 has a slight edge in terms of thickness, where it looks to beat the Note 5 by just under 1mm.

The S6 was similar to the Note 5 already, but the new S7 has deepened the comparison even further. That's nothing to complain about, though, as the Note 5 is a very attractive device.

One of the biggest points in the Note 5's favour is the device's signature S Pen. This nifty little stylus slides out from a housing on the bottom of the device, allowing users to make quick drawings or notes on their phone.

It's a feature that's specific to the Note range, meaning the S7 doesn't benefit from it. It's a shame, as the ability to annotate basically anything on the fly can be incredibly useful.

However, the S7 has some tricks up its sleeve. Samsung has reinstated the IP68 water and dust-proofing and the expandable storage, both of which were fan-favourite features axed from previous devices. The MicroSD card slot in particular gives the S7 a major advantage over the Note 5.

Sticking with the trend established by last year's releases, Samsung has fitted the Galaxy S7 with its own Exynos 8890 CPU, rather than a Qualcomm processor.

This will almost certainly provide a performance increase over the Exynos 7420 found in the Note 5. Samsung is citing a 30 per cent boost, as well as a 10 per cent bonus to power efficiency.

Both chips are octa-core models, with two sets of four cores, clocked at different speeds. The Note 5 has four 1.5GHz cores and four 2.1GHz cores, while the S7's processor is a shade faster on paper at 1.6GHz and 2.3GHz respectively.

Both have 4GB RAM allocations though, so the difference between the Note 5 and S7 may not be as stark as with other last-generation devices. We'll know more when we can test the S7 in laboratory conditions, however.

The Note 5 is fitted with a 3,000mAh battery, which powered it to an impressive 15.5 hour result in our battery test.

Samsung has now upped the S7's battery size to match the Note 5, and combined with the Exynos' power-efficiency claims, this could see it equal - or even beat - the Note 5's score.

Both devices also have quick-charge capabilities, as well as inductive wireless charging. The Note 5 was one of the first Galaxy phones to not have a removable battery and Samsung has stuck by this decision with the S7 which also has a sealed battery.

One of the main areas that Samsung has been focusing its improvements on is in the camera. The S7's snapper now has an aperture size of f/1.7, as opposed to the Note 5's f/1.9.

This means the S7 lets in 25 per cent more light, which alongside bigger pixels on the sensor results in better low-light photography. It also has the world's first dual-pixel smartphone camera sensor, and the housing itself has been slimmed down to a protrusion of just 0.46mm.

The Note line is designed to be Samsung's top-performance range, for niche customers and those that get very particular about their devices. As such, they're generally better-specced than the equivalent flagship model.

However, in the absence of a new Note 6, the Galaxy S7 has bridged the gap with better internals and a more robust feature-set. The only areas in which the Note 5 has its younger sibling beat is in sheer screen size and the inclusion of S Pen support.

Neither of these are compelling enough reasons to opt for the Note 5 over the Galaxy S7, we'd argue. Even taking these into account, though, the biggest obstacle remains the fact that Samsung is not going to sell the Note 5 in the UK.