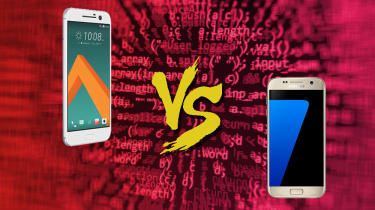 Once one of the most popular Android brands around, HTC has fallen out of favour with smartphone users - many of whom have opted for Samsung's sleeker, shinier flagship devices.

However, the company is hoping to reverse this trend with the new HTC 10, its latest attempt at reclaiming its position as a top-tier Android manufacturer.

HTC has maintained a unique aesthetic style throughout its One portfolio, with a distinctive curved rear shell and brushed aluminium finish. The HTC 10 still has a curved back, but the effect of it is dramatically lessened by a massive chamfer on the rear, lending it a distinctive look.

HTC has also gone for a semi-gloss finish, as opposed to the glossier 'bare metal' look of previous One models. The result is a sleek and professional-looking device. Both phones have fingerprint readers built into their Home buttons.

Aesthetics are in the eye of the beholder, but the HTC 10 looks far less distinctive than the Galaxy S7's glass-and-metal body. The S7 is one of the most attractive and well-built handsets on the market, and the HTC 10 still lags behind.

It's also slightly chunkier than the S7, coming in at 1.1mm thicker and almost 10g heavier. It's not overweight by any metric and we'll have to wait and see for a final review unit to see how they compare in-hand.

The HTC 10 has a 5.2in '2K' screen, which may fool some potential buyers into thinking it's closer to a 4K resolution than other display standards. It is, in fact, the same 2560x1440 pixel resolution as the 5.1in Samsung Galaxy S7. The difference in pixel density is negligible at less than 15 pixels per inch.

What is different is the technology behind the display - the HTC 10 uses a Super LCD 5 display, rather than the Super AMOLED panel adopted by Samsung.

The HTC 10 has also bought back capacitive buttons, after opting for software buttons for previous iterations of its flagship line.

Anyone with half an eye on current smartphone trends won't be surprised to learn that the HTC 10 comes with 4GB of RAM and a Snapdragon 820 CPU, as it's fast becoming standard issue for new flagships.

It's also basically the same setup found in the Galaxy S7. The only difference is that in some territories, the Snapdragon 820 has been switched out for Samsung's own-brand Exynos 8890 processor.

The Exynos uses eight cores with Big.Little architecture, while the Snapdragon 820 is a quad-core model. Both are clocked at similar speeds, however - 2.2Ghz for the HTC 10, compared to 2.3Ghz for the Galaxy S7.

Both phones come in 32 and 64GB variants with the ability to add more storage using micro SD cards.

Both devices come equipped with a 3,000mAh battery, which powered the S7 through 18 hours worth of video playback in our battery benchmark. HTC are making strong claims, touting a full two days of battery life on a single charge.

The HTC 10 can ostensibly charge faster than the S7, although the two companies are claiming the same charge time - 50 per cent battery from 30 minutes charge.

Camera technology appears to be the area that an increasing number of manufacturers are prioritising for their new devices, HTC and Samsung among them.

HTC has evidently spent a lot of time and effort on beefing up the 10's camera, packing in a 12MP Ultrapixel 2 camera, second generation laser autofocus and a larger aperture.

The HTC 10 has the same number of megapixels as the Galaxy S7's camera, but has physically larger pixels - 1.55m, versus 1.4 m on the S7. This means that the 10 should be able to capture more light, theoretically resulting in better low-light photos.

However, this is offset by the S7's larger f/1.7 aperture size, which should let in more light compared to the HTC 10's f/1.8 aperture. The S7 also features phase-detection autofocus, a method used by many DSLR cameras - although not necessarily better than laser autofocus.

Both cameras also feature the ability to capture photos in the RAW format, frequently used by professional photographers and editors, as well as fine-grained manual camera controls and optical image stabilisation.

Both HTC and Samsung have listened to criticisms of their custom Android overlays - Sense UI and TouchWiz, respectively - and scaled them back, bringing them more in line with Google's Material Design. 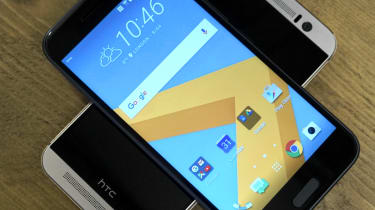 HTC has even worked directly with Google to "reboot the Android experience", removing duplicate apps which should result in a more streamlined experience. This means that some of the default apps, such as music and gallery software, will be from Google, and some will be from HTC.

Underneath the overlays, both phones run Android Marshmallow 6.0, meaning they have all the latest features of Android's current operating system. 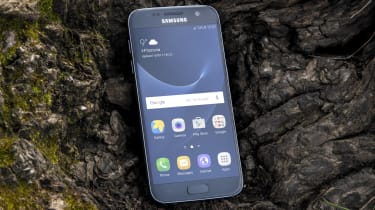