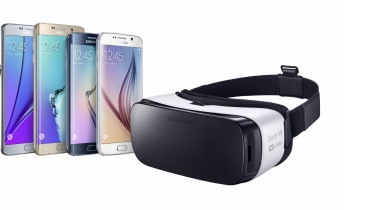 The year 2016 will be remembered for many things, including when humanity was introduced to the world of virtual reality. Following five years of development, and a lot of hype, the Oculus Rift and HTC Vive were released that year and are now available to buy. Sony's Playstation VR was also introduced, another contender to fight for the crown of VR king.

Despite this, these headsets can cost upwards of 350, with the Vive priced at 750 or so. Additionally, Oculus and HTC's headsets also need a powerful PC in order to run, meaning that only hardcore PC enthusiasts will be able to use them properly. 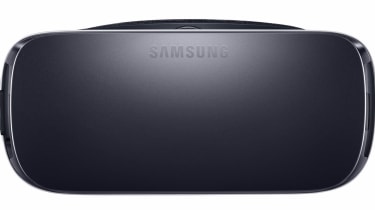 South Korean company Samsung, on the other hand, has decided to mix things up a bit. After analysing Google's do-it-yourself Cardboard technique, Samsung's Gear VR headsets cost only 119 with a controller (99.17 exc. VAT). Its only requirement is that you have a Samsung smartphone which works with the headset, and in the UK these are the Galaxy S6,S6 Edge, S6 Edge+, Note 5,S7,S7 Edge, Galaxy S8 and S8+. 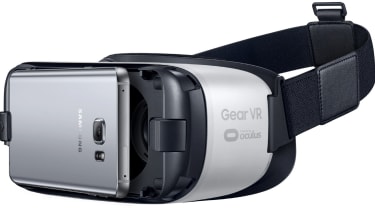 For this to work, you will have to install the Oculus app and make an account before you get started. Take off the headset's plastic cover, slide in your phone, adjust the velcro straps and turn the wheel on top of the headset to bring your new world into focus. Easy. 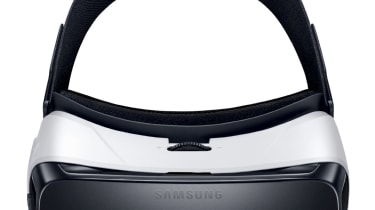 Samsung has provided a quick and easy way to impress your family, friends or co-workers. There is no way they won't be wowed by suddenly being transported to a floating apartment in the sky as they sit back and browse the Gear's menu. It is very convincing and after getting the hang of it they won't even notice that the headset is there. It weighs a meagre 500g or so (depending on the phone you use) and we didn't feel any undue pressure on our head when we were testing it out.

The straps are secure, and even the eyes and nose padding is comfortable. It needs to be said that the cushioning could do a better job at blocking out external light, but the device feels just as good to wear as the Vive and Oculus Rift. If you want to pass the Gear VR around to other users quickly, you can always avoid using the head straps and simply hold it up to your face. 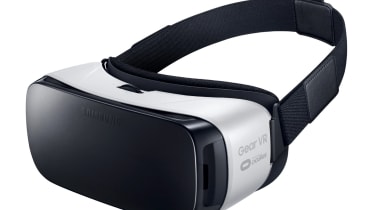 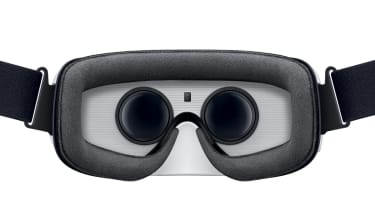 We tested the Gear VR with a Galaxy S7. This is arguably the best choice when it comes to delivering a smooth virtual reality experience, as it not only has more powerful components than any of Samsung's S6 phones, but its 5.1in, 2560x1440 screen resolution will also, in theory, provide the sharpest picture, as it has a higher pixel density than the 5.5in S7 Edge.

In practice, you can still see the screen's individual pixels no matter what you're looking at, but this is a problem we've encountered on the high-end headsets as well, so it's certainly not unique to the Gear. The edges of our black-rimmed porthole were also never quite as sharp as objects in the centre of the display, but again this is something we've noticed elsewhere, too. If anything, it's impressive that Samsung has managed to come this close to other VR headsets, which in some cases cost almost ten times the price.

However, the Gear's mobile origins start to become clear as soon as you start moving your head, as the phone's 60Hz refresh rate can occasionally produce a noticeable amount of ghosting. The worst culprit is the menu crosshair showing your line of sight, as this can quite often leave a prominent trail of pixels behind as you move your head. It's not bad enough to immediately make you grasp for the sick bucket, but it can be off-putting, particularly when it's accompanied by regular drops in framerate.

Of course, how much you'll be bothered by these technical hitches will depend on the kind of content you're using. The Gear's most obvious attraction is its virtual reality games. Most can be controlled by simply moving your head, but many require the use of the headset's four-way directional touchpad as well. This is found on the side of the headset, and can be tapped in the middle or used to swipe up and down or left to right. Considering its lack of haptic feedback, it's surprisingly responsive, and we were never left wondering whether we'd tapped or swiped it correctly. 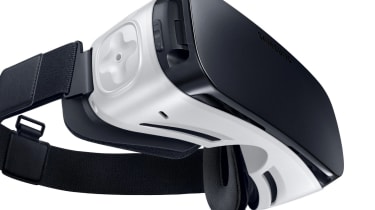 Holding your hand to the side of your head can get tiring pretty quickly, though, so you may want to pair the headset with an optional Bluetooth controller instead if the game supports it. In fact, apps such as the Oculus Arcade won't load without one, so you may need to invest in an additional gamepad if you're absolutely desperate to have the original Sonic the Hedgehog writ large in front of your eyeballs.

However, beyond the type of retro classics you'll find in Oculus Arcade, the vast majority of the Gear's free gaming titles are pretty throwaway. Some are quite impressive, such as the endless flight game Polyrunner, but most, like In Cell or Cerevrum, aren't any more compelling than the average mobile game you'd play to while the time away on your phone.

No one's going to sit down for half an hour to play Temple Run VR, for example, and the games that solely relied on head-tracking made us feel quite nauseous, forcing us to quit after just a few minutes of play.

It's only when you venture into paid VR games that you begin to see where the Gear's magic lies. Puzzle game Esper 2 was particularly brilliant, and it's clear that titles like this have been designed with VR in the mind right from the ground up rather than simply had it tacked on in a quick port. 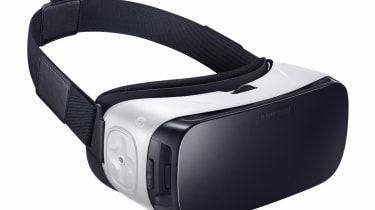 The 360-degree video experiences are a bit hit and miss, too. For instance, as much as we love the idea of sitting right in the middle of the Saturday Night Live studio, complete with its live audience behind us, the resolution of the video footage in the VRSE video app is so poor and grainy that you can barely see the actors in front of you.

The same goes for some of the sports videos inside the NextVR app as well. It's a great idea putting viewers right in the middle of the Youth Olympics ski jumping, but when each jumper quickly descends into a mere blur of grainy pixels, the awe and wonder of the experience becomes disappointingly underwhelming.

There's also Netflix to enjoy if someone else is using the TV. Here, you're placed in a virtual living room, and watching films on its virtual big screen really does make it feel more impressive than bending over a real-life phone or tablet. That said, our eyes got quite tired after a while, and we found that 30 minutes was about all we could take before we had to take a break.

All this poses some big problems for the Gear VR. As with any new platform, more (and hopefully better) content is undoubtedly on its way, but the sheer number of problems we experienced does call into question the headset's overall longevity.

For instance, outside of its entertainment possibilities, the Gear could be a useful tool for virtual meetings or professional simulation and training experiences, such as medical procedures or military situations. But unless the footage resolution becomes a lot sharper, we're not sure it will provide any more benefit than traditional videos and demonstrations. 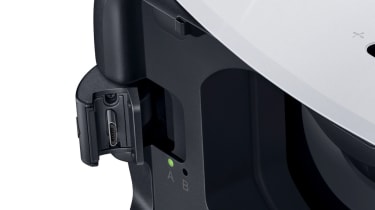 The Gear VR's micro USB connector is used for communication between your Galaxy phone and the headset's various sensors. It also has a passthrough socket for charging your phone while in use - essential as VR can quickly drain your phone's battery.

Likewise, the Gear is inherently limited by the hardware inside Samsung's smartphones, from the processor and GPU to the display's refresh rate. This is possibly why the Gear's initial selection of apps feels very much like the worst side of the Google Play Store as opposed to an enticing glimpse into the future, but there is some good stuff there if you're willing to hunt for it and, more importantly, pay for it.

This lack of quality experiences is perhaps understandable when the headset is so much cheaper than its rivals, but whereas other headset demos have continually blown us away with their ingenious use of VR technology, our time with the Gear left us feeling distinctly unimpressed.

What's more, we can't help but think this is the type of experience Oculus founder Palmer Luckey might have been talking about when he said that 'really bad VR is the only thing that can kill off VR'. The Gear VR might surprise us by becoming a mass market hit, but we fear its novelty factor will be pretty short-lived.