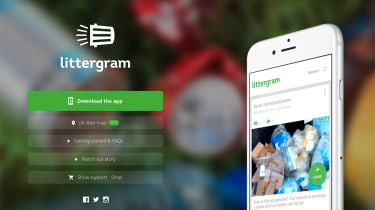 The founder of LitterGram, a British start-up aiming to rid the nation of littering, has been ordered to change the name of his app by the social network Instagram.

LitterGram invites users to take photos of rubbish in their community and report it to the local authorities.

The free app was set up by Danny Lucas, a businessman from Kent, and combines photos with geotagging and the ability to socialise with and share images with other LitterGram users.

Lucas's reason for creating the app was because of his frustration at seeing "our great and beautiful country used as one huge litter bin". He has described his app as something that can help "make a difference by naming, shaming and sharing".

Instagram, which was picked up by the social network giant Facebook for $1 billion (629m) in 2012, believes Luca's use of the name LitterGram is "not acceptable", and has insisted that the app's name is changed.

In a letter, Instagram's lawyers told Lucas: "Our client appreciates the social objectives behind the LitterGram project and the personal time, money and effort Mr Lucas has invested in it. However, having taken everything into consideration using LitterGram as the name for the project is still not acceptable.

"It utilises and relies on social media usage to achieve its aims and our client cannot allow use of such a name in relation to services which are core to its world renowned activities in this area."

Lucas has been given three to six months to cease using the name or face legal action.

In response, the LitterGram owner has published an open letter to Facebook founder Mark Zuckerberg, and posted a personal video plea, urging him to stop any legal action against the app.

Lucas set up the non-profit app LitterGram in 2014 after sending photos of litter to his local council. He has also been using it to educate younger users about the problems rubbish can cause.

"Our mission is simple; to make littering socially unacceptable and put the Great back into Britain," said Lucas in a message alongside his video plea.

Facebook announced earnings of $1.51 billion (1bn) this week and reaped a significant stock price rise as a result.

The social network has not released an official statement its disagreement with LitterGram.

However, a Facebook spokeswoman told IT Pro that it had been engaged in conversation with Lucas for several months to see if there was another way for him operate his app and not risk infringing on Instagram's trademark.

The company added that it had not yet filed a lawsuit against LitterGram and hoped to come to an agreement over the names out of court.