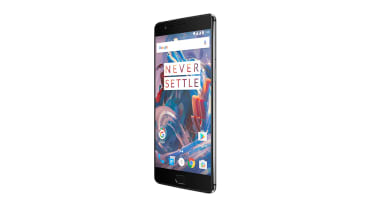 The OnePlus range has gained a sizeable cult following since its launch a few years ago, and fans can now get their hands on the company's latest handset, the OnePlus 3.

Once again, the device looks like a real flagship killer, with top-notch hardware at a great value price. Here's everything we know about the OnePlus 3 so far.

16/11/2016: OnePlus has announced it will be releasing a long rumoured upgrade to its OnePlus 3 flagship device, known officially as the OnePlus 3T.

The new device, unveiled during a launch event on Tuesday, will go on sale on the 22 November for US customers, and the 28 November in Europe. Preorders will be available through 02 for UK customers this Friday.

The OnePlus 3T will be available as both 64Gb and 128Gb models, priced at 399 and 439 respectively and significantly undercutting the rival iPhone 7.

The upgraded 3T will eventually replace the OnePlus 3 model when stocks run out, as the company has stated it will no longer be producing the older device.

Launching with the latest version of Android, Marshmallow 6.0.1, the new device brings a host of improvements to the user interface. A customisable notification bar, resized app icons, password protection for individual apps and expanded screenshots will be exclusively available on the 3T.

It also features some hardware upgrades, shipping with the Qualcomm Snapdragon 821 processor over the older 820 found in the OnePlus 3 and other flagships such as the LG G5.

The 3T features a beefed up front facing camera, doubling the megapixels to 16 for crystal clear selfies and shooting 1080p video. The rear Sony camera is the same one used in the older OnePlus 3 but features some improved lens protection and image stabilisation.

Most importantly, users can enjoy a bigger battery life as OnePlus has upped the capacity by 13% to 3,400mAh without increasing the overall weight and dimensions of the device. The new battery supports their 'Dash Charge' fast charging tech, allowing for 0-100% in half an hour.

The 3T will come with the same 5.5in full-HD AMOLED screen, as well as the same 6Gb of LPDDR4 RAM.

11/10/2016:Chinese smartphone producer OnePlus could release a new version of its OnePlus 3 smart phone, by the name of OnePlus 3S or OnePlus 3 Plus. OnePlus's new smartphone is rumoured to be a more powerful version of the OnePlus 3.

OnePlus 3 is a relatively cheap smartphone (329), with full HD AMOLED display, 6GB of RAM and the Snapdragon 820 SoC. After it arrived in Europe, some buyers had to wait to receive it.

An unknown source from OnePlus's supply chain told Gizmo China that the grey version of OnePlus 3 is already out of stock in the country. The same source said the new smartphone will come with a more powerful CPU using Snapdragon 821. It could also feature LCB panels, as shortage of AMOLED displays could be a reason for the interruption in OnePlus 3 production.

Time will tell whether these rumours are actually true. Earlier this year, OnePlus CEO Carl Pei said the manufacturer would focus on just one smartphone model this year.

27/09/2016:The OnePlus 3 is now available on UK tariffs, with O2 becoming the first mobile operator to stock the phone.

"As the only operator in the UK to sell the OnePlus 3, we're proud to be bringing our customers more choice when it comes to picking their next flagship phone," said Magnus McDonald, head of devices at O2. "The OnePlus 3 offers high quality cutting edge technology and great design at an affordable price and we think our customers will love it."

The device will be available in O2 stores from the 29 September, though OnePlus has allowed people to buy the phone direct from the company since its release.

OnePlus's new smartphone has been widely anticipated on the back of good reviews, though the company raised the phone's price from 309 to 329 in July following Brexit, which caused a drop in the value of sterling.

11/08/2016: Rumours of a mini version of the OnePlus 3 Mini smartphone have been quashed by one of OnePlus's co-founders.

A miniature version of the smartphone was spotted benchmark site GFXBench with similar specifications, according to areportbyPhone Arena, but with a smaller screen size.

But OnePlus co-founder Carl Pei went on Twitter to shut the rumour down with a short "No. #rumorshutdown".

Sales of the OnePlus 3 are doing so well that it is struggling to cope with demand in 23 European countries to the point that it has stopped selling the phone in those countries for a month, according to a blog post by Pei. This is despite hiking the price in the UK by 20 in response to Brexit.

05/07/2016:OnePlus today raised the price of the OnePlus 3 smartphone in response to Brexit.

The company warned customers last week that it may have to take such action in response to sterling's falling value against other currencies like the US dollar, plummeting to a 31-year low, and today confirmed the move.

Writing in a blog post, OnePlus said: "While we've held off action for as long as we can, the sharp drop witnessed in the currency markets following the Brexit decision has forced us to re-evaluate theOnePlus 3's pricing in the UK at a time of significant demand."

However, the phone manufacturer will not raise the price immediately.

"There's still time to pick up the device at the current price of 309," the company said. "We said that we'd give you as much notice as possible, and we're committed to taking the hit over the next few days and absorbing the resulting losses."

The cost of phone accessories will not change, OnePlus confirmed, saying they will remain at their current prices.

The affordable smartphone is currently priced at 309 in the UK, but the Chinese manufacturer issued a warning that it may raise the phone's price because of the decline in the pound's value.

Sterling dipped dramatically in the days following the UK's vote to leave the EU last week, and the pound is now worth just $1.34 in USD.

The company wrote in a blog post: "The worrying downward trend of the GBP may make it difficult to maintain our current pricing structure in the UK.

"Our margins have always been thin, and our expenses are mainly in USD. This being the case, sudden drops such as the one that the pound has recently experienced could have a direct impact on our prices."

It added: "Whatever happens with our prices in the UK, it won't come out of the blue. We'll try as best we can to keep you informed, when we know more, we'll be sure give you several days of notice."

15/06/2016:The OnePlus 3 has officially launched, debuting in a worldwide VR event that revealed it has 6GB of RAM and 64GB of storage.

The launch marks the first time that the company has released a phone without relying on its trademark invite-only distribution system, and customers can purchase the phone right now from the company's website.

As expected, the new device brings with it a selection of top-quality hardware, including a quad-core, 2.2GHz Snapdragon 820 CPU and a colossal 6GB of RAM, as well as 64GB of storage.

It's fitted with a non-removable 3,000mAh battery, charged via a USB Type-C charging port. The OnePlus 3 also includes 'Dash Charge', a Quick Charge-style technology that OnePlus claims can provide 63 per cent battery in just 30 minutes of charging.

The screen is a 5.5in Optic AMOLED display panel, with a full 1080p resolution. The bezel is less than 1mm thick, ensuring a maximum screen-to-body ratio.

OnePlus has opted for am anodized aluminium chassis, with the phone bearing a resemblance to other android devices from the likes of Huawei and HTC. The OnePlus 3 is available in either 'graphite' or 'soft gold' colours.

The Chinese manufacturer posted a promotional image of a 3' in silhouette, along with a date and time on the microblogging site, Weibo, Phone Arena spotted.

The OnePlus 3 will be unveiled in Shenzhen at 10am local time which is 3am BST, and the previous day 10pm UTC.

The event is to be streamed as a specially created 360-degree experience for customers who were fortunate enough to order a free Loop VR headset.

It is suspected that the new phone will available the next day, on 16 June, in China, before being rolled out to other countries.

There has been no mention of invites as yet, which OnePlus handsets have historically operated on, potentially opening up the phone to more consumers.

One of the most unique things about OnePlus was the company's controversial invite structure, which meant that fans had to sign up to a waiting list before they had the option of purchasing one.

Now, however, the company has done away with the invite system altogether. Anyone that wants a OnePlus 3 can head over to the company's website and buy one right now no invitation required.

Even better, OnePlus has still managed to retain its attractively low pricing, with its third flagship retailing for just 257.50, excluding VAT.

O2 became the first UK operator to stock the device on 29 September.

OnePlus has decided to follow the rest of the market and adopt an aluminium unibody construction.The device, which has a very slightly curved rear, brings to mind recent HTC offerings, as well as the immediate comparison with Apple's iPhone.

It features a USB Type C charging port, as well as a fingerprint reader located in the physical home button on the phone's front. The device is available in either graphite or soft gold colours.

One of the key selling points of the OnePlus range has always been its combination of top-shelf flagship internals with rock-bottom prices, and the OnePlus 3 is no exception.

Rather than making the jump to QHD, as other rivals have done, the OnePlus 3 will still have a 1080p display, with the Optic AMOLED panel meanuring 5.5in. The front and rear cameras will have 8MP and 16MP sensors respectively, including 4K video recording.

The OnePlus 3 will also include NFC, a feature that was notably absent from its predecessor. As expected, it will also be based on an own-brand OxygenOS variant of Android Marshmallow.