The Queen guitarist has created a virtual reality viewer for smartphones 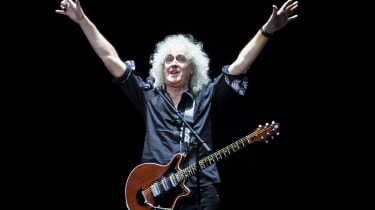 Queen guitarist Brian May has designed and launched his own smartphone virtual reality viewer as a competitor to Google Cardboard.

May's London Stereoscopic Company first released the OWL viewer in 2009, which uses the Victorian technology of stereoscopy (creating an image with the illusion of depth using two images shot from different angles) to allow users to view 3D images printed on cards.

Now May is launching a 25 smartphone kit, which allows the OWL to be adapted into a VR viewer similar to Google Cardboard. The viewer consists of a plastic frame with a pair of optical lenses at one end and a cardboard-backed magnetic strip at the other.

Any type of smartphone can be mounted into the viewer, giving users the chance to immerse themselves in 3D, 360-degree and virtual-reality photos and videos. The polypropylene frame is collapsible and a slider can be used to adjust the viewing angle.

"This was my dream. It's bringing Victorian technology into the 21st century and the Victorians knew a thing or two," May told Trusted Reviews.

The viewer will be released in mid-June and fans of Queen may want to consider purchasing one. The recent Queen + Adam Lambert concert in Barcelona was filmed by 360-degree cameras and the footage will be made available as a VR experience.

"I'm so excited about this because nobody's done it. This will be the first time that you have a virtual reality trip continuously through a concert. It's not like flipping between cameras and positions. It's a continuous journey and a step that nobody's taken before," May said.