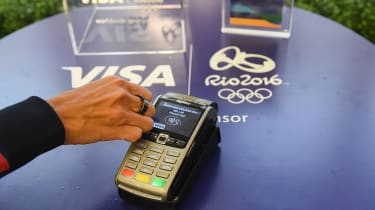 Visa has debuted a new contactless payment ring, which is scheduled for a test-run at the 2016 Rio Olympic Games.

The ring will contain a Gemalto-manufactured chip and an NFC antenna, and will be waterproof to a depth of 50 meters. Crucially, the ring also uses tokenisation, which uses a unique digital key for transactions, rather than any identifiable account details.

The technology will be initially trialed at this year's Olympics in Rio de Janeiro, where it will be used by 45 Visa-sponsored Olympians. If successful, the company will reportedly look at the possibility of a wider rollout at some point in the future.

The ring works like any other contactless payment technology - simply touch the ring to a contactless terminal, and the payment will be processed automatically. The rings are currently linked to prepaid contactless debit cards that can be loaded up via a website.

The announcement marks a general trend away from traditional payment methods, with Apple Pay, Android Pay and contactless cards all becoming increasingly prevalent.

However, a full deployment of Visa's contactless ring may face trouble, as reports suggest that similar technologies like Apple Pay have met with limited enthusiasm.

Reuters reports that outside of the US, adoption of Apple Pay has been slow, with local competitors in China freezing it out of the most lucrative global markets. Mobile payments in the country totalled around $1 trillion last year, according to data from iResearch.

"As an Olympian, rings have a special meaning to me," said Missy Franklin, a four-time Olympic gold medalist and Team Visa athlete.

"The Visa ring is a great innovation that I know all the athletes competing in Rio will enjoy as it will be great to go from a competition to purchase without having to carry a wallet or card."