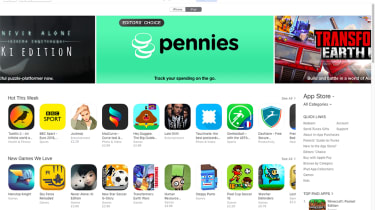 Apple is lowering its App Store commission for the first time, giving publishers and developers a larger cut of their sold apps.

Since the App Store launched in 2008, developers selling apps through Apple's digital marketplace have had to make do with a 70/30 split between themselves and Apple.

Starting from 13 June, Apple will lower that revenue split to 85/15, on the condition that an app retains a subscriber for more than one year.

All current subscriptions are eligible, and the change will apply immediately to apps with users that are more than a year old.

The change means that an app offering subscriptions, such as Spotify, stands to make around $15 million (10.3m) in extra subscription revenue every month.

In addition to new revenue split, Apple is also overhauling its terms for subscriptions.

Previously only certain apps such those in media and entertainment or productivity could charge subscription fees.

From this autumn, all apps will be eligible to offer subscriptions.

Opening up all apps to subscriptions is been seen by some industry watchers as a way for Apple to stimulate more high-end productivity and creation apps on its iOS platform, which powers devices like the iPad Pro.

Technology writer and noted Apple watcher, John Gruber, wrote: "This could be the change that makes the market for professional-calibre iPad apps possible I think this is terrific news both for developers and users."

Games will also be eligible, which could potentially have a major impact on titles such as Candy Crush Saga and Clash of Clans, which have attracted millions of players, and operate on a free-to-play model, supplemented by in-app purchases.

VR-related apps, too, which serve the likes of Oculus Rift and the HTC Vive may benefit.

However, as Apple itself notes, though all categories of apps will be eligible, the subscription business model will not be appropriate for every app.

Further changes are being made to App Store very soon.

Apple's digital marketplace now offers some 1.5 million apps surpassed only by the Google Play Store. As such, finding content can be a struggle for users, and featured app' spots have become a much sought after positions for developers.

Soon ads will appear at the top of search results in the App Store. Apple said these promotions will be relevant to the given search terms. Location data may also be used to serve some ads, but users can opt-out of this in their settings. Ads will not to displayed to users under 13.

These announcements come ahead of Apple's annual Worldwide Developers' Conference (WWDC), which takes places in San Francisco next week. Expect further announcements about the Apple's plans for the App Store then.