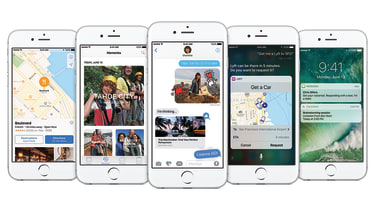 Apple's WWDC developer conference saw the company unveil iOS 10, the latest version of its mobile and tablet operating system. The new software includes a host of new features, including substantial updates to areas like Siri, VoIP tools and iMessage.

There's lots to look forward to no matter how you use your iPhone, whether you're an urban explorer or a serial texter. Here's how iOS 10's new features stack up against iOS 9.3.

Siri, Apple's digital assistant, was first launched as part of the iPhone 4s back in 2011, but since then it's had limited improvements compared to the rest of Apple's software.

This is set to change, however, with the news that Apple is opening up Siri's SDK to developers, allowing them to build voice command integrations into their apps. This will up Siri's usefulness dramatically, as major companies like Uber and Dominos enable voice command functionality.

One of the great things about tools like Facebook Messenger and WhatsApp is that they can basically replace your traditional cellular service, allowing users to send calls over the internet.

With iOS 10, VoIP tools will genuinely feel like the equal of traditional phone calls. The iPhone app's API has been opened to developers, meaning when your iPhone receives a WhatsApp call, for example, it will react in the same way as it does when it receives a standard call.

For those that still actually use voicemail, iOS 10 will also perform automatic voicemail transcription, giving you a text record of your messages without actually forcing you to listen to them.

Apple is gunning for IM services like Snapchat, WhatsApp and Facebook Chat with the newest version of iMessage, and it's likely to be this that most consumers get excited about.

There are a number of new features for iMessage in iOS 10, such as 'bubble effects', which lets users add different effects to their messages for emphasis, such as softly fading in.

You can also use 'invisible ink', which obscures messages until you slide your finger over them, meaning you can surprise people with messages.

Emoji - the new language of communication in 2016 - have been overhauled too. Emoji are 30 per cent bigger in iOS 10, and predictive text will suggest emoji as you type. iOS 10 will even go back through your messages to suggest which words you can 'emojify'.

The iMessage SDK has been opened up, so developers can now integrate their tools into the app. Apple showed off the function with Square Cash, which now allows users to send money with a text.

Apple's Music and News apps have both been redesigned, with a new coat of paint and a slight reshuffle in terms of layout. In terms of functionality, however, nothing much has been added, aside from the addition of subscriptions to News and a lyrics pane to Music.

The camera has to be one of the most commonly used features of the iPhone, so it's about time that Apple invested some energy into improving the Photos app. Thankfully, it has, and the camera looks much better for it.

Much like Google Photos, the app now employs AI and machine learning tools to intelligently identify the subjects of your photos, including separate locations, items and people. It then groups them, allowing you to look through, for example, all your photos of specific friends.

There's also a new 'memories' tab, which collects all of the photos and videos from a given event - a festival in Ibiza, for example, or a kayaking trip in the Dordogne. It can even string them together with music and text overlays to create a charming little video.

There's good news for the professionals, too: iOS 10 will now support RAW image capturing. This feature - which captures a full image with no compression or alteration - is used in professional photography, and has featured on numerous Android handsets.

Apple's Maps app has often been seen as the poor relation to Google's offering, but the latest version could turn the tables. Apple is promising to be more proactive and hands-on with its latest version, offering a variety of suggestions to users.

These suggestions include route alterations, restaurant recommendations and more, and will vary based on your location and time of day. There are also optimised integrations for Apple's CarPlay software, too.

Like many of its other apps, the Maps SDK is now freely available, so expect to see heaps of plugins and integrations with major third-party services like Uber or OpenTable.

It's bad news for the iPhone 4S, as iOS support for the device officially ends as of iOS 10. If you want the new version, then it's time to upgrade. Second and third-generation iPads are also out of luck, as is the fifth-gen iPod Touch.

However, updating something as old as the iPhone 4S wouldn't be a good idea, even if it was supported. The 4S already saw a marked performance drop when updating to iOS 9, so updating to the latest iOS version would likely render it unusable.

Anything from the iPad 4 and iPhone 5 upwards will be compatible with iOS 10, but as always, devices on the lower end of that curve may want to skip the upgrade, as the age of the hardware can often mean significant speed decreases.