The BlackBerry Neon, Argon and Mercury will be launched between August and early 2017 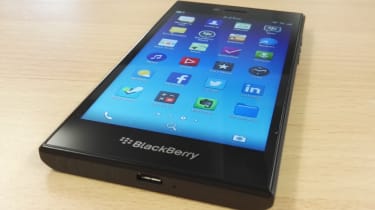 BlackBerry will reportedly announce three newAndroid-based smartphones in the next six months, but only one will feature the Qwerty keyboard we've come to expect from the business-centric company, according to VentureBeat.

The first device to launch will be the BlackBerry Neon, a mid-range 5.2-inch touchscreen device, powered by a Qualcomm Snapdragon 617 chip, 3GB of RAM, 16GB of storage and 2,610mAh battery.

The BlackBerry Argon is the flagship touchscreen device, toting a 5.5in 2560x1440 QHD display, just like the Priv.

Giving the Argon a bit more oomph over its mid-range counterpart will be a Qualcomm Snapdragon 820 processor with 4GB of RAM, 32GB of storage and a 3,000mAh battery. Multimedia skills will be led by a 21-megapixel rear facing and 8-megapixel front facing snapper.

It will follow the Neon with a release date of November and will be more focused on business users compared to the lower-priced Neon, with a fingerprint sensor and USB Type-C charging port to complete its spec list.

The final device to launch in this trio will be the sole phone to feature a Qwerty keyboard, the Mercury. Because of its keyboard beneath the screen, the display will only measure 4.5-inches. It will run on a a Snapdragon 625 CPU, with a more meaty 3400mAh battery.