But is the touchscreen-only device enough to save BlackBerry's smartphone fortunes? 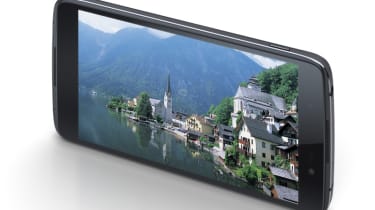 BlackBerry has launched its touchscreen-only Android-powered smartphone, the Dtek 50, despite critics predicting it will fail to succeed in the market.

"The real challenge is whether Blackberry can convince enough corporate buyers to buy a batch of mid-range phones," said Nick McQuire, analyst at CCS Insight told the BBC. "A lot of that comes down to the beauty of the device and what it has inside, but more importantly the price."

BlackBerry's Dtek 50 is based on the design of a similar Android-powered smartphone made by low-cost manufacturer Alcatel. It doesn't feature the Qwerty keyboard BlackBerry fans have come to love and its price tag is aimed at the lower-end of the market with a suggested retail cost of $299 (230).

The move is less of a risk than BlackBerry's flagship Priv smartphone that cost $700 (530) when it launched less than a year ago but has also cut many of the features from the company's first Android-powered device.

"It's certainly a low-cost, low-risk way of going about it," said McQuire continued. "It's a necessary move for the handset business and delivers on a promise Mr Chen has been making, about complementing the Priv with a number of other devices."

"The biggest challenge Blackberry faces is that it has to consistently educate customers that it's not a dying company," continued McQuire. "Fundamentally its software business is good, and financially has been much stabilised in the last 12 months.

"But news reporters only tend to touch the handset business, that's what people like to read about. Its software security business doesn't get the same headlines. It's a decent business, but it's boring."