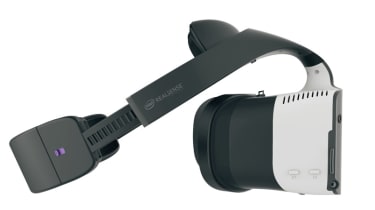 Revealed by CEO Brian Krzanich at the Intel Developer Forum in Sans Francisco, the new headset is part of the company's 'merged reality' platform, which Intel claims is the future of VR.

"Traditional VR systems need a dedicated space to be all functioning and working, to me the funny thing is that's not really a virtual world. It doesn't feel virtual when you're tied to a confined space," said Krzanich. "Today I believe we are going to introduce something that will change all that."

"Merged reality delivers virtual-world experiences more dynamically and naturally than ever before," he wrote in a blog post, "and makes experiences impossible in the real world now possible."

Intel claims that merged reality will be able to provide full-motion virtual reality experiences without "the cost - and creep factor - of installing high-end sensors in every corner of your living room".

Unlike the HTC Vive, Alloy's 'merged reality' is made possible by Intel RealSense cameras attached to the headset and is not dependent on setting up any external sensors or cameras around the room.

The computing power is located in its Head-Mounted Device (HMD), allowing a free range of motion with 6 degrees-of-freedom across a large space, Intel said. This combined with collision detection and avoidance, enables the wearer to make use of physical movement to explore a virtual space.

Merged reality will also allow players to use their actual hands to manipulate objects in VR, rather than controllers - technology already being worked on by companies such as Leap Motion.

The Project Alloy headset is an all-in-one unit, with the computational hardware built into the device. This means that users can fully roam around a virtual environment without the need to be connected to a PC. 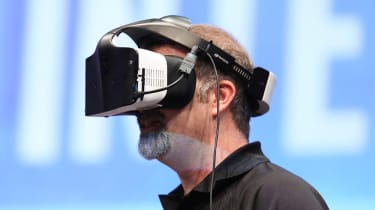 While devices like Google Cardboard and the Gear VR currently offer untethered, mobile VR, they are currently fairly low-quality, as they are powered by smartphone hardware. The HTC Vive and Oculus Rift offer much more impressive experiences but require a wired connection to a high-end PC in order to function.

Krzanich was quick to note that Project Alloy will not replace these top-quality gaming VR headsets, as it cannot replicate the high framerates and response times necessary for smooth VR gaming.

"But for the rest of us, we now have the choice to experience our virtual worlds across larger spaces without pesky cords. No more being jolted out of your VR experience because you have reached the end of your cord."

Project Alloy will also be fully open, the company revealed. Intel will publish open APIs for the ecosystem and open up the hardware, so developers and partner companies can create their own products based on the platform.

Microsoft is also partnering with Intel to make sure Windows content is optimised for Project Alloy and other Intel-based VR devices.

"Regardless of whether you're seeking to experience augmented reality or virtual reality, your freedom in the world of your choice depends on how you merge your realities and the technologies that enable you to cross over from the physical to the virtual, and the virtual to the physical," Krzanich wrote.

"We're rapidly moving toward a world where the boundary between the digital and the physical is eroding, and merging in new exciting ways."