Google Pixel 2 hands-on review: Back and better than ever

Google's second-generation flagship delivers the goods - at a cost 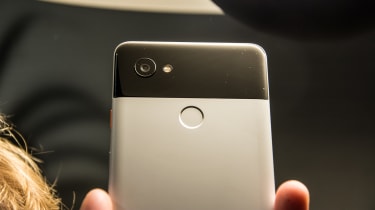 The Google Pixel was one of last year's surprise hits. The search giant's first stab at creating its own smartphone from the ground up was a roaring success, garnering critical praise and a substantial fan following thanks to a stunning camera, a sleek design and slick, intuitive software.

Faced with the 'tricky second album', Google has a lot to prove with its second-generation flagship. Will the company be able to build on its early success, or has the novelty of the Pixel worn off?

These days, design is one of the biggest differentiators between smartphones. As technical capability starts to plateau, how a phone looks can be at least as important as how it performs - especially when customers are being asked to drop 500-600 on it.

The original Pixel XL was one of the most well-designed phones we've tested - it felt solid and sturdy without weighing too much, and despite being thicker than most of its rivals, it sat in the hand so well that it fooled you into thinking it was much smaller than it actually was.

Aesthetically, there have been a few minor changes. Google has ditched the chunky rear chamfer in favour of a rounded rear shell, the glass plate covering the top of the back-plate is now shorter and wider, and the screen bezels have shrunk, mirroring the edge-to-edge displays of the iPhone 8 and Galaxy S8. 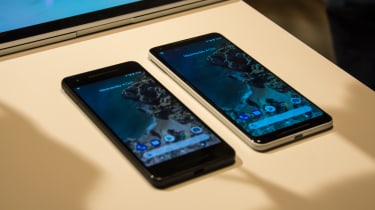 It feels absolutely gorgeous in the hand; the textured aluminium casing is lovely, and it feels svelte and well-balanced to hold, despite the fact that it's not the slimmest device on the market.

The alterations, subtle though they are, combine to create a really rather lovely device. It's nowhere near as flashy as the Apple or Samsung's flagships, but it's genuinely well-made, and feels satisfyingly premium to use.

As with the design, Google hasn't taken any great leaps regarding the Pixel 2's display. Like last year's model, the smaller Pixel features a 5in 1080p panel, while the larger XL version sports a QHD+ screen. The only difference, aside from the fact that both devices now feature a Samsung-style 'always-on display', is that the Pixel 2 XL has a 6in display rather than its predecessor's 5.5in panel, and has swapped the standard 16:9 aspect ratio with the ultra-tall 18:9 aspect ratio used by the LG G6 and others.

The Pixel 2's display's quality is lovely, with the OLED panel delivering rich, vibrant colours and pin-sharp detail, even on the nominally lower-resolution 1080p version. The QHD+ Pixel 2 XL is even more impressive, with a pOLED display and a 538ppi resolution. Both deliver absolutely sublime visuals, with spectacular contrast and colour accuracy.

The Pixel 2 is fitted with a Qualcomm Snapdragon 835 - the same CPU that's been at the heart of virtually every Android flagship launch this year. It's paired with 4GB of RAM, which matches rival flagships like the S8 almost exactly. 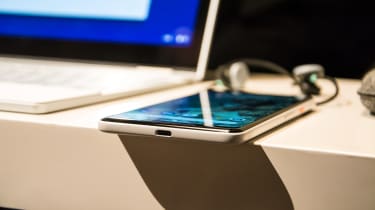 As such, we're expecting the Pixel 2 to run super fast. Identically-outfitted devices could put on a serious turn of speed with those components, and given Google's proven skill at software optimisation, we wouldn't be remotely surprised if the Pixel 2 managed to top our performance charts.

In practicee, the Pixel 2 naturally felt smooth, zippy and generally slick to use, which is no shock. The true test, of course, will come once we can get it into the labs and run it through our suite of performance benchmarks, but on first impressions it seems highly capable indeed.

Battery life is still a make-or-break issue for most phones and with more and more phones achieving figures of 20 hours and above, the bar is getting higher all the time. The original-recipe Pixel was very slightly underwhelming in our battery tests, with a score of less than 16 hours, but we found that its real-world battery life was significantly better than these results would indicate. On top of that, it had fast-charging capabilities to ensure that it was easy to top back up again.

The Pixel 2 features the same 2,700mAh battery as the original predecessor, while the Pixel 2 XL's battery capacity has been bumped up by 100mAh. Given that not much has changed on the hardware side, we'd expect the Pixel 2 to comfortably match its predecessor in terms of battery life - or even exceed it, particularly in everyday use. Fast-charging has made a return too, promising seven hours of charge in just 15 minutes, so we're not expecting battery life to be a problem at all.