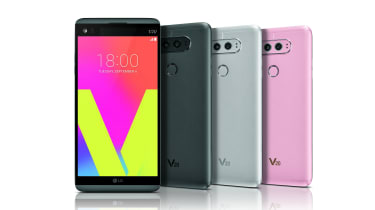 The LG V20 was announced at LG's launch event in San Francisco. Here's everything you need to know about the firm's new dual camera phone, a successor to its LG V10.

Sales of the phone start on 29 September in South Korea. The LG V20 will launch in the US soon and according to LG will be available "globally in Q3 2016".

In South Korea, the phone will cost 899,800 won (about $800). There is currently no pricing information available for the UK market, but we expect the phone to go on sale in the UK at around 550.

The LG V20 will be one of the first new phones to sport Android Nougat out of the box, outside of Google's Nexus devices. It also runs LG's UX 5.0+ UI, which is an update on effort seen in the LG G5.

It also features Google's new In Apps search functionality that allows users to search for information within built-in Android apps.

The phone features a dual rear camera set-up, much like the iPhone 7 Plus. It sports wide angle lenses on the front and rear. The rear cameras include a 16-megapixel standard lens and an 8-megapixel lens that can take pictures up to 135 degrees.

The front boasts a single five-megapixel camera with a 120-degree lens. This lens can also switch to an 83-degree frame when necessary.

The LG V20 has advanced image stabilisation technology, courtesy of Qualcomm, which should make taking pictures easier if you are unsteady. There is an Auto Shot function that claims to produce the perfect selfie with a face detection feature that takes a shot as soon as the subject is ready and smiling.

Video-wise, it has 4K, slow motion and time-lapse options as well as filters for those Instagram moments.

Uniquely for a phone, the LG V20 has two displays at the front. The main 5.7in Quad-HD (256x1440, 513ppi) IPS Quantum Display is supplemented by an always-on mini display above it. This secondary panel shows notifications at a glance.

It also supports lossless formats such as FLAC, DSD, AIFF and ALAC.

Unlike the iPhone 7, the LG V20 has a 3.5mm headphone jack, and bundles in a Beoplay set of earphones.

The LG V20 sports a Qualcomm Snapdragon 820 processor and 4GB of LPDDR4 RAM. There's 64GB of storage, plus up to 2TB expansion via a microSD card.

The phone will have a 3,200mAh battery that will also be removable. It also supports quick charging over USB-C. The battery can be accessed via a small button on the side of the phone.

The LG V20 will be similar in style to the LG V10.  Its dimensions are 159.7x78.1x7.6mm and weighs 174g. It won't have the modular build of the LG G5, which is exclusive to the G series of devices from the firm. It will have a metal casing design with lightweight AL6013 aluminium at the base and silicone polycarbonate are top and bottom to protect against drops. There is also a fingerprint scanner on the rear.

The V20 will come in titan, silver and pink colours.