Google Pixel review: Android O could be hitting the Pixel this week 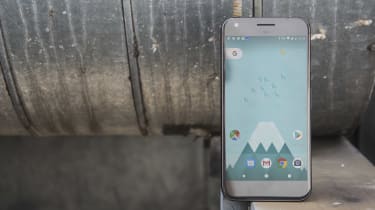 Sadly, it's not all good news. While expandable storage and robust waterproofing have historically been areas where Android scored major points over the iPhone, both features are missing from the Pixel. Google has attempted to soften the blow by giving Pixel owners improved cloud storage tools for photos, but that's not going to be much comfort for those who like to stuff their phone with music, movies and apps.

The lack of full waterproofing is also particularly galling given that the iPhone 7 has now made the jump to a full IP67 rating, certifying it against full immersion. The Pixel is 'splash resistant', but unlike competitors from Samsung and Sony, it won't survive a total dunking. If we had to guess why, we'd put our money on the rear-mounted glass panel - achieving a total seal between that and the metal chassis seems unlikely.

As with Google's previous devices, biometric security is provided courtesy of a rear-mounted fingerprint sensor, now dubbed the 'Pixel Imprint'. Same as with the Nexus 5X and 6P, it's fast and accurate, unlocking the phone immediately without the user having to wake it up.

We're still not entirely sold on the sensor's location, though. While it's placement of the rear of the phone is incredibly convenient for unlocking if the phone's already in your hand, those who like to leave their phone lying on the desk next to them are forced to pick it up to unlock it, which feels inconvenient compared to the iPhone or Galaxy S7.

The centrepiece of the whole affair is the Google Assistant, the company's answer to AI helpers like Siri and Cortana. It's basically the same tech previously seen on Android's Google Now and Now On Tap features, but souped-up and threaded throughout the whole phone. Just like Now On Top, a long press on the home button launches the Assistant, which uses a conversational chat interface.

As with other digital assistants, you can ask it to find locations, directions and other information. It's also context-aware, which means you can string commands together without having to repeat all the relevant information each time. For example, ask the assistant to find a good pizza place, and you can then ask "how do I get there?" - it will understand that you want directions to the place it suggested.

It's great at all the things you'd expect it to be great at - simple questions, mathematical calculations and transport information are all handled with suitable aplomb, as are its integrations with Google services like Gmail and Google Calendar.

However, it suffers from same problem as every other smartphone-based digital assistant, in that if you've got your phone out already, it's often easier to just check whatever you want to know yourself. The range of things it can do is quite limited too - it can't currently control smarthome equipment, and there's no integration with services like Netflix or Chromecast just yet.

More importantly, the voice recognition is a little patchy. We found ourselves having to frequently repeat ourselves in order to get the Assistant to understand us, and in some cases we had to give up altogether. In particular, it can't match the quality of the voice recognition engine used by Amazon's Alexa service, which only occasionally misunderstood us.

It's also got a lot less personality than Alexa. The Assistant's speech is quite robotic and stilted, which mars the conversational air it's shooting for. It lacks the little human touches that make Alexa feel relatable, coming off a little mechanical and unfriendly by comparison.

It's possible that software updates will improve the Assistant in the future, but for now you're unlikely to use it for more than basic Googling.

The Pixel's camera is the best smartphone camera ever tested by image specialists DxOMark, and we're inclined to agree; it is absolutely superb. Contrast and colour capturing is both phenomenal, with the HDR+ mode doing an excellent job of balancing out oddly-lit scenes. Low light photography is also excellent, and there's a battery of new software features to ensure that your images look sharp and professional. 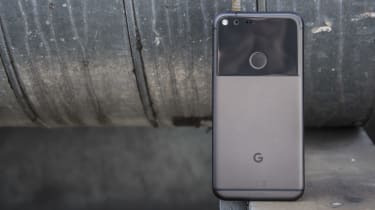 The Pixel is a truly excellent device, and a genuine competitor to the iPhone 7. There's one fly in the ointment, though, and that's the high price. Excluding VAT, the Pixel XL will set you back just under 600 when bought SIM-free -that's the same as the iPhone 7 Plus, and the Pixel falls just short of rival devices from Apple and Samsung in a couple of areas.

If you can stomach a high pricetag, though (and iPhone 7 sales figures suggest that many people can), there's a lot to love about the Pixel. It's the best-looking device that Google has ever produced by a long stretch, and it can definitely play in the big leagues when it comes to display quality and performance - even if it's not quite top of the heap.

Although it's missing a couple of Android fans' most beloved features and the Google Assistant is unimpressive compared to others, the Pixel is one of the best Android phones we've seen this year. It's not what we'd call an 'iPhone-killer', but it's certainly an encouraging step in that direction.

Look past the disappointing Google Assistant, and the Pixel is a highly capable premium flagship. It's not quite as good as its main rivals on paper, and it's missing some fan-favourite features, but we're inclined to forgive it thanks to its slick and sophisticated software and world-class camera.