Smartphones will switch network if they lose reception under the plans 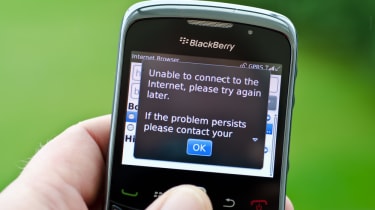 A group of MPs has called for mobile phone networks to change the way they work, allowing people to switch networks temporarily if phone reception isn't available with their current provider.

The British Infrastructure Group said the move would mean better mobile phone coverage around the UK, allowing everyone to use mobile services, no matter which network they have a subscription with.

"It is unacceptable that areas in Britain continue to have such poor mobile connectivity, and that overseas visitors can expect better mobile coverage than Britons stuck with a single provider," group chairman Grant Shapps said.

"The time for excuses from the mobile sector is over. The government must make a better call for Britain and bring national mobile coverage policy into the 21st Century."

The British Infrastructure Group's report explained how 17 million UK mobile customers had poor reception at home, while 525 areas around the UK had no coverage at all.

Additionally, it highlighted that the government has failed to deliver its promise of delivering better mobile network infrastructure, despite it offering 5 billion investment to upgrade equipment.

The group comprises 90 backbench MPs, who represent the full spectrum of political parties, but are unified in their call for legislation around domestic roaming to change.

Other aims of the group include making it cheaper for customers to switch provider and identifying the worst networks, offering up a more competitive service for the nation.

At the moment, foreign visitors get a better deal because their mobile phones will switch networks automatically to provide the best service.