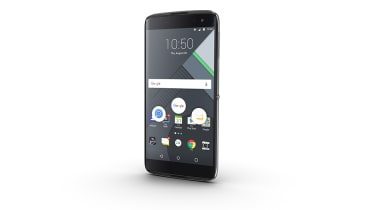 Performance is disappointing too. While on paper, the DTEK60's Snapdragon 820 processor and 4GB of RAM should offer flagship-quality power, we found it to be a frustrating experience.

Basic functions like answering emails, using simple applications and flicking through social media are fine, but if you start to overload the DTEK60 with too many open apps or demanding operations, it can start to seize up. We noticed frequent lagging, stuttering and freezing in practice, and the experience of swiping through menus and apps often felt sluggish.

Despite this, however, BlackBerry's device performed well in our tests. GeekBench had some problems with the DTEK60, so we couldn't run our usual suite of performance benchmarks, but alternative tests run with AnTuTu revealed that the DTEK60 was just behind the Pixel in terms of CPU speed, and even bested it in memory performance and 3D rendering. It can't touch the speeds of recent iPhones, but it's more than quick enough - on paper, at least.

Storage is great, with a 32GB internal storage allocation and the aforementioned MicroSD card slot providing a capable amount of space. Charging is provided via USB-C, and QuickCharge 3.0 support is enabled too.

BlackBerry claims that the DTEK60's 3,000mAh battery can power it through a full 24 hours of mixed use, but this proved to be decidedly over-ambitious; in real-world use (including music streaming, social media and emails), we found ourselves regularly having to charge it about halfway through the day. It clocked up a score of 14 hours and 35 minutes in our video streaming battery tests, which isn't a dreadful result, but lags behind the exceptional battery life of the OnePlus 3 and Galaxy S7 Edge.

Elsewhere, the DTEK60 has a 5.5in AMOLED display, with a QHD resolution and 534ppi. It's a great screen, with deep colours and sharp contrast, although the maximum brightness could be a tad higher.

A brighter spot comes when we get to the software. BlackBerry has thankfully given up on its own-brand operating system and moved to the much more well-developed Android Marshmallow OS, and it's also loaded the DTEK60 with all the best features of the classic BlackBerry software.

This includes the BlackBerry Keyboard, the BlackBery Hub - which remains one of our favourite tools for dealing with a bustling inbox - and other flourishes such as pop-up widgets and gesture shortcuts.

Also included is security software such as the company's DTEK app, which lets you check how secure your device is at a glance, as well as a password manager to keep all of your various login credentials secure.

BlackBerry gets points for not messing with the Android layout or applying its own custom skin, and the company's software is excellent for business users. The company has a proven pedigree when it comes to productivity software, and looking at the DTEK60, it's easy to see why.

It's not really a reason to buy it, however. Most of BlackBerry's best software - including the BlackBerry launcher and BlackBerry Hub - is available via the Google Play Store, meaning you don't have to restrict yourself to a sub-par BlackBerry handset to take advantage of it.

On paper, the DTEK60 is an excellent phone, with cutting-edge specs and buckets of enterprise features. However, we can't help but feel like there's something lacking. The experience of using the DTEK60 isn't as fluid or satisfying as other flagship devices, and the phone itself isn't as good as it could be.

The intermittent performance issues are a pretty major black mark against it, particularly for a phone that's targeted at prosumers and power-users. Many business users have come to expect lightning-quick performance from their phones, and the DTEK60 just can't deliver that.

The main selling-points of BlackBerry's latest device are its security and enterprise credentials, but most mainstream phones have caught up with (and in some cases surpassed) BlackBerry in these areas. iOS, notably, has become the OS of choice for the security community.

The DTEK60 isn't necessarily a bad phone, and there are worse picks for a corporate-issue handset. It feels like less than the sum of its parts, though, and pales in comparison to other, more robust rivals. Whether for business or personal use, there are far better options than the BlackBerry DTEK60.

BlackBerry's latest Android phone features sub-par performance, a disappointing user experience and little to help it stand out from the crowd.