iOS and Android OS upgrades can drain your battery life

Which? finds smartphones lose up to three hours' charge after OS upgrades

Updating iPhones and Android devices to the latest versions of their operating systems can cause battery life to fall by as much as three hours, according to consumer product researcherWhich?.

After updating a two-year-old iPhone 6 from iOS 8 to iOS 10, the battery drained 38 minutes faster than before,Which?said, putting overall battery life at 664 minutes. A Google Nexus 6 lost around three hours of continuous web browsing after updating from Android 6.0 Marshmallow to 7.0 Nougat.

It'ss not just battery life, as some software updates can take up considerably more hard drive space on some devices, the review found. Users with a MicrosoftSurface Pro 3 tabletwill lose almost 30GB of storage space if upgrading to Windows 10, enough for an entire photo album, according toWhich?.

Similarly, storage capacity on the Galaxy Tab S2 dropped from 24.03GB to 20.98GB after updating from Android 5.0 to Android 6.0 Marshmallow. 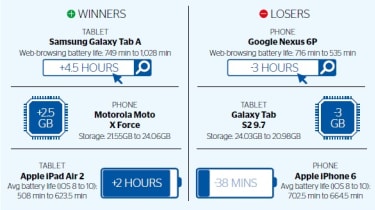 Infographic courtesy of Which?

"Our latest research shows that, while upgrades are meant to boost the performance of our phones and tablets, the opposite can actually prove to be true," said Richard Headland, magazine editor atWhich?.

"Given how much we rely on mobile devices, companies should do more to tell us about the possible downsides of updates, as well as the benefits."

Although updates are recommended by companies to improve security or stability,Which?claimed that providers should be more transparent when it comes to effects on device performance.

"They should also explore ways of allowing their customers to revert to the previous software if they don't like the new version, and are willing to forgo any new security features it may offer," saidWhich?in a statement.

IT Prohas approached Samsung, Apple for comment, but has yet to receive a reply.

In September the consumer watchdog published new research after receiving "hundreds" of complaints about Microsoft'sWindows 10update. Of 2,500 users surveyed, 12% ended up reverting back to previous versions, in some cases losing emails and files or complete hardware failure.