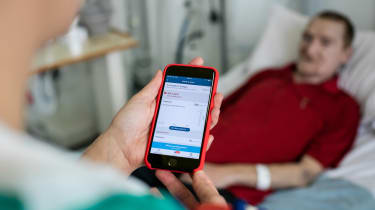 DeepMind's co-founder believes his company's access to NHS data is absolutely essential for its health app to function, claiming critics who say it's a breach of confidentiality are just trying to tarnish the company's reputation.

"We absolutely had good reason to access it in the first place," DeepMind co-founder Mustafa Suleyman said in an interview with Wired. "We're acting as a processor on behalf of the controller, which is an agreement that is consistent with every other technology company that's operating within the space."

The information will be shared between the NHS Royal Free Hospital Trust in London with DeepMind to help uncover early signs of kidney deterioration via an app that could result in patients getting the medical support they need before their condition worsens.

However, privacy campaigners say it is against the rights of patients to have their data shared. Additionally, critics claim Google's DeepMind had not approached the MHRA regulator before testing the app as recently as May.

"Approval wasn't actually needed previously because we were really only in testing and development, we didn't actually ship a product," explained Suleyman.

The UK's information commissioner is now investigating into DeepMind and the NHS's agreement to ensure it's legitimate and is being used for the benefit of citizens.

"When the patient goes into the hospital they operate under a implied consent notion whereby the hospital collects information about the patient that can only ever be used for the single purpose of improving their direct care, and for no other purpose."

A second partnership has been announced between a London NHS Trust and Google to help quickly diagnose kidney disorders in patients using an app.

The Royal Free Hospital in London has called on Google's artificial intelligence sector DeepMind, to help integrate a mobile app that will alert NHS specialists to signs of kidney deterioration in patients. This five-year agreement supersedes a deal made last year for the development of a hospital-based app.

"Doctors and nurses currently spend far too much time on paperwork and we believe this technology could substantially reduce this burden, enabling doctors and nurses to spend more time on what they do best, treating patients," said David Sloman, chief executive of the Royal Free.

The new app 'Streams', will notify clinical teams as soon as test results become available and provide the necessary patient information to accurately diagnose and treat symptoms before a situation worsens. Around 10,000 patients will be saved each year thanks to early diagnosis, according to the Royal Free.

"When it's fully built, we believe that this will speed up the time to alert nurses and doctors to patients in need down from hours to a few seconds," said Mustafa Suleyman, head of Applied AI at DeepMind. "And by freeing up clinicians' time from juggling multiple pager, desktop-based and paper systems, it should redirect over half a million hours per year away from admin and towards direct patient care at the Royal Free alone."

In a partnership over the next five years, DeepMind hopes to integrate the app into other areas within the Royal Free Hospital that rely on early diagnosis for successful treatment.

"We think that Streams could also be used to help patients at risk from sepsis and other causes of organ failure," added Suleyman, "where signs of deterioration are often difficult for clinicians to spot, and where early intervention can be the difference between life and death."

The new app integration will bring 'unprecedented levels of data security', which will log every data interaction and will be subject to regular audits by a panel of independent reviewers.

However, campaigners have raised concerns about data breaches and privacy, as the details of around 1.6 million patients each year will be shared with the Google subsidiary. In May, New Scientist obtained the data-sharing agreement from the first deal through a freedom of information request. It revealed that DeepMind was granted access to five years worth of patient information, including all admission, discharge, transfer and A&E data.

Following prototype testing, the app has now been registered with the Medicines and Healthcare products Regulator Agency (MHRA) and is ready to be deployed across Royal Free Trust hospitals in early 2017.