Regardless of whether or not the AirPods are still under warranty 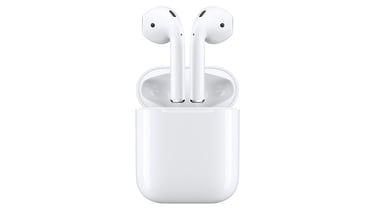 As spotted by MacRumours, Apple recently updated its repair and replacement costs for AirPods on its iPhone Service Pricing page.

While the firm doesn't seem to be offering AppleCare+ for AirPods, it is instead providing a standard one-year warranty that's available on all Apple products. The good news is that if the AirPods need service during that one year period, all work will be covered for free.

However, the bad news is that if you were to lose or damage one of the AirPods or the charging case, Apple will charge $69 for a replacement, regardless of whether or not the wireless earphones are still under warranty. The same fee applies for out-of-warranty service repairs. As for AirPods that lose battery capacity, repair is free during the one-year warranty period or $49 out of warranty.

A 'limited number' of Apple AirPods will be sent out on Monday (19 December), Apple has revealed.

The news should bring some cheer to iPhone 7 users, who have been waiting a long time.

Despite the Store listing only displaying 'Coming Soon' up until yesterday, Apple has now updated the AirPods listing, saying they are available from 159.

However, although when they first arrived for pre-order on the Apple website delivery was specified as from Monday (19 December), they are now showing as a dispatch time of up to four weeks.

The company wouldn't say who would get first dibs on the limited quantities ready to ship, but first-come-first-served would seem like the sensible order of delivery. There's sure to be some disappointed customers who missed the order deadline for delivery next week.

"Apple today announced AirPods are available to order online now from Apple.com and will start delivering to customers and arriving at Apple Stores, Apple Authorized Resellers and select carriers next week," the company's US press team said in a statement.

Although up until yesterday, AirPods were labelled as 'coming soon' on the Apple Store website, a report in the Wall Street Journal (WSJ) claimed that the device would not launch until after Christmas because Apple had discovered a design flaw.

"Apple must ensure that both earpieces receive audio at the same time to avoid distortion," a person familiar with the matter told the WSJ, although the source did say Apple is working fast to "resolve what happens when a user loses one of the earpieces or the battery dies".

Apple AirPods, the wireless headphones presented alongside the new iPhone 7 and originally meant to be released in October, could only become available next year, according to reports.

Apple ditched the traditional headphone jack on the new iPhone 7 and iPhone 7 Plus, instead pushing wireless headphones for Apple's flagship smartphone.

The Wall Street Journal reported that reasons for the delay could include issues with the engineering of the AirPods, which might make them harder to perfect.

A person familiar with the development of the AirPods told the publication that the delay could be caused by Apple's attempt to develop a new technology for wireless headphones.

While most wireless headphones work with the phone transmitting a Bluetooth signal to one earpiece, and that earpiece transmitting it to the other, Apple would be trying to engineer a system through which each AirPod earbud receives the signal directly from the phone.

This might result in the signal being out of sync or arriving differently on the two earpieces. The WSJ reports that Apple is trying to find a way in which to ensure the audio arrives at the same time to both headphones.

In a statement reported by the Express, Apple said: "The early response to AirPods has been incredible. We don't believe in shipping a product before it's ready, and we need a little more time before AirPods are ready for our customers."

The exact release date of Apple's AirPods is still unclear, but once they become available they should cost 159.